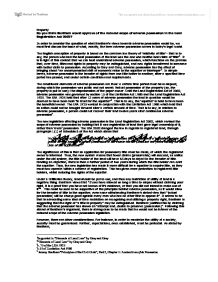 Bentham justifies this by claiming that the adverse possessor has shown an "attempt and...desire to preserve [possession]". Following this strand of Bentham's argument, there is strong case to be made that he would not be in favor of the reduced scope of the adverse possession legislation. However, there are other considerations. For instance, in order to maximize the utility of a society, security must be guaranteed. Further, expectations, once established, must be protected. As stated by Bentham, "Arbitrarily to take away from him who possesses, in order to give to him who possesses not, would be to create a loss upon one side and a gain upon the other....such [an] act...would spread alarm among all proprietors, by attacking their security". The implication of this is that adverse possession is not so uniformly supported by Bentham as could have been previously implied - the principle of maintaining expectations must still be held. In Pye v UK, though the decision was ultimately in favor of the UK, many of the judgments expressed surprise at the legislation as it then stood. Lord Bingham of Cornhill stated that it was "difficult to see any justification for a legal rule which compels such an apparently unjust result and even harder to see why the party gaining title should not be required to pay some compensation at least"6. ...read more.