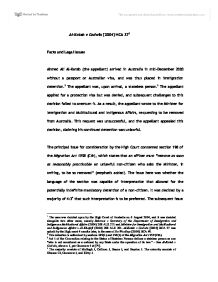 Al-Kateb v Godwin [2004] HCA 371 Facts and Legal Issues Ahmed Ali Al-Kateb (the appellant) arrived in Australia in mid-December 2000 without a passport or Australian visa, and was thus placed in immigration detention.2 The appellant was, upon arrival, a stateless person.3 The appellant applied for a protection visa but was denied, and subsequent challenges to this decision failed to overturn it. As a result, the appellant wrote to the Minister for Immigration and Multicultural and Indigenous Affairs, requesting to be removed from Australia. This request was unsuccessful, and the appellant appealed this decision, claiming his continued detention was unlawful. The principal issue for consideration by the High Court concerned section 198 of the Migration Act 1958 (Cth), which states that an officer must "remove as soon as reasonably practicable an unlawful non-citizen who asks the Minister, in writing, to be so removed" (emphasis added). The issue here was whether the language of the section was capable of interpretation that allowed for the potentially indefinite mandatory detention of a non-citizen. It was decided by a majority of 4:34 that such interpretation is to be preferred. The subsequent issue - 2 - considered by the High Court concerned Chapter III of the Constitution, and whether this was infringed as a result of the provision of indefinite detention without a judicial order. ...read more.

McHugh J, whereby interpretation based on context is seen by Kirby J as the touchstone of modern constitutional and statutory interpretation.29 Such a notion is inherent in common law30, and derogation from such established principles has, therefore, led to Al-Kateb being authority for the proposition that "context necessarily - 6 - impinges on constitutional interpretation"31. The resultant judicial indifference to contextual considerations not only means that Australia is isolating itself from the rest of the developed world,32 but Australian citizens are also being denied the protection of internationally recognised rights. Conclusion The majority decision in Al-Kateb represents a radical shift in the legal-constitutional framework.33 The legitimacy of the Executive's curtailment of common law rights protection, combined with strict positivist constitutional interpretation, has resulted in a case authority devoid of valuable sources of fundamental principles. As Boyle claims, "due to the flawed majority decision, the slim majority and the questionable political climate, Al-Kateb is a decision that should remain the subject of caution"34. - 7 - List of References 1. Articles / Books / Reports J Allan, "'Do The Right Thing' Judging? The High Court of Australia in Al-Kateb" (2005) ...read more.