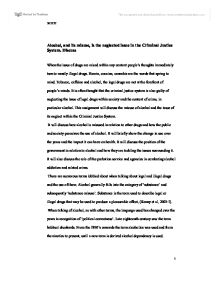 Alcohol, and its misuse, is the neglected issue in the Criminal Justice System - Discuss.

Alcohol, and its misuse, is the neglected issue in the Criminal Justice System. Discuss When the issue of drugs are raised within any context people's thoughts immediately turn to mostly illegal drugs. Heroin, cocaine, cannabis are the words that spring to mind. Tobacco, caffeine and alcohol, the legal drugs are not at the forefront of people's minds. It is often thought that the criminal justice system is also guilty of neglecting the issue of legal drugs within society and the context of crime, in particular alcohol. This assignment will discuss the misuse of alcohol and the issue of its neglect within the Criminal Justice System. It will discuss how alcohol is misused in relation to other drugs and how the public and society perceives the use of alcohol. It will briefly show the change in use over the years and the impact it can have on health. It will discuss the position of the government in relation to alcohol and how they are tackling the issues surrounding it. It will also discuss the role of the probation service and agencies in combating alcohol addiction and related crime. There are numerous terms lobbied about when talking about legal and illegal drugs and the use of them. Alcohol generally falls into the category of 'substance' and subsequently 'substance misuse'. Substance is the term used to describe legal or illegal drugs that may be used to produce a pleasurable effect, (Kenny et al, 2003:1). When talking of alcohol, as with other terms, the language used has changed over the years in recognition of 'political correctness'. Late eighteenth century saw the term habitual drunkards. From the 1930's onwards the term alcoholics was used and from the nineties to present, until a new term is derived alcohol dependency is used. Of all the drugs that are used alcohol is the most popular. It has been argued that Britain is obsessed with the more modern pharmacological combinations of drugs, i.e. ...read more.

However a Home Office report in 1987 stated that the Police thought that underage drinkers were generally widely involved in violence and disorder, both inside and outside licensed premises. This sparked a call for cracking down on the underage-drinking situation. It has been suggested (IAS, 2002), that factors linked to the higher rates of violence include the over crowding in bars, poor layout and the slow flow of traffic. Two hundred people squashed into a bar that will comfortably hold seventy-five will cause frustration and feelings of aggression. The lack of availability of food and the high number of discount drinks that encourage heavy drinking are also seen as a contributory factor. Serving food tends to be associated with less incidents of aggression, (Deehan, 1999). Another factor that is suggested to have an effect is bar workers who don't practice responsible serving and aggression and intimidation from the door staff. Door staff would benefit from being experienced and able to pre-empt aggressive situations. Bar staff are overstretched but need to recognise the customer that has been stood at the bar for over ten minutes watching people come after him getting served. Feelings of frustration and anger could then come to the surface. The violent offences occurring with use of alcohol are reflected in the amount of offenders appearing before court or on Community Rehabilitation Orders for affray, assault occasioning actual body harm and common assault. A high number of them admit to have been drinking before the offence occurred. There is also a strong link between alcohol and domestic violence. Kenny et al (2003), suggest that due to the nature of many domestic incidents and the reluctance of the victim to report fully the details it is difficult to quantify the problem. However the British Medical Association (1989), reported that over forty per cent of domestic violence were alcohol related and other researchers have suggested that 60 - 70% of men who assaulted their partners did so under the influence of alcohol. ...read more.

" Despite the emergence of a range of partnerships in community safety and criminal justice as well as alcohol specific structures, systems for addressing misuse within the criminal justice system remain 'ad hoc'." (Kenny et al, 2003). It does indeed appear that alcohol is the neglected issue of the criminal justice system, even though the costs, in all ways are higher than that of any other drug. There needs to be a greater awareness of the effects that it can have not just on the individual but the wider implications on society as a whole. How many of us have been getting ready for a night out and had a couple of drinks to get 'warmed up'. And then gone out and kept on drinking. Many people can be labelled as 'binge-drinkers'. We are all aware of the effects that drinking can have on our bodies, as are the people who light up their next cigarette and the coffee addicts. Unfortunately I come into all three catergories. Drinking plays a mostly enjoyable part in our culture. But not everyone drinks in moderation and alcohol misuse can have serious consequences. Some of these consequences can be seen clearly: town and city centre violence and disorder on weekend evenings, teenagers drinking in parks and public places, and people with serious alcohol problems who drink on the streets and are at risk of homelessness. But the difference is the links that alcohol has with crime and offending. If people are going to drink in excess they need to be able to control themselves and be aware of the effects on other people around them. Their partners, children, work colleagues. Alcohol is indeed a neglected issue that needs to be focused on more in society. The bar man who ignores you standing there for ten minutes waving a fiver and serves the stunning blonde stood next to you is a little more than irritating, this is where we must exert control. After all, we know deep down that even though he served her first, he has no chance!! 505232 1 1 ...read more.