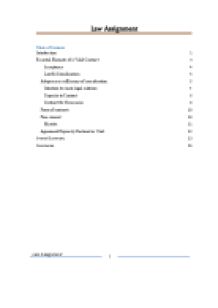 Transfer-Encoding: chunked ﻿Law Assignment Table of Contents Introduction 1 Essential Elements of a Valid Contract 3 Acceptance 4 Lawful Consideration 5 Adequacy or sufficiency of consideration. 5 Intention to create legal relations 7 Capacity to Contract 8 Contract for Necessaries 8 Form of contracts 10 Free consent 10 Mistake. 11 Agreement Expressly Declared as Void. 12 Overall Summary 13 Conclusion 15 ________________ Table of Cases Case 1(PHARMACEUTICAL SOCIETY OF GREAT V BOOSTS CHEMIST (1953) 2 Case 2 (Blackpool & Fylde Aero Club Ltd v Blackpool Borough Council). 3 Case 3 (WILKIE V LONDON TRANSPORT (1947) 3 Case 4 (Hyde v Wrench (1840) 4 Case 5 (POWELL V LEE (1908), 5 Case 6 (CURRIE V MISA ( 1875), 5 Case 7 (Chappell & Co. Ltd v Nestle Co. Ltd (1960) 6 Case 8 (CARLILL V CARBOLIC SMOKE BALL CO (1893) 7 Case 9 (SIMPKINS V PAYS (1955), 7 Case 10 (NASH V INMAN (1908) 9 Case 11 MERCANTILE UNION GUARANTEE CORPORATION V BALL (1937) 9 Case 12 (IN BURNARD V HAGGIS (1863) 10 ________________ Introduction Recently, we were given an assignment for our course (Introduction to Law) and it is a group assignment. Well, the requirement of the assignment is to present a written assignment on the following topic which is ?Not all agreements are contract even though all contracts agreements? Based on the topic above I will discuss it based on essential elements constitutes and enforceable contract. How do we differentiate agreement and contract? We can discriminate it by the definition. What the definition of agreement and contract? According to Helen J.Bond & Peter Kay (1995), a contract is an agreement which legally binds the parties. Sometimes contracts are referred to as ?enforceable agreements? this is rather misleading since one party cannot usually force the other fulfil his part of the bargain. For the agreement, it is a form class reference between different parties, which maybe be used in written, oral and lies upon the honour of the parties for its accomplishment rather ...read more.

I will give a case which is about an agreement between person who share a household, but which has nothing to do with the management of the household will probably be intended to be legally binding. In (SIMPKINS V PAYS (1955), three ladies who stayed in the same house took part in a fashion competition run by a newspaper. They agreed to send their entries on one coupon and to share any prize money. The court rejected the contention that the agreement to share intended to be legally binding since the contract had nothing to do with the routine management of the household. Case 8 (CARLILL V CARBOLIC SMOKE BALL CO (1893) Case 9 (SIMPKINS V PAYS (1955), Capacity to Contract In order for an agreement to be in valid and enforceable contract both parties must have capacity to contract? In general all persons have the right to enter into any contract they wish. Different rules apply to minors, corporations, mental patients and drunks. Persons who do not have capacity to the contract in these three aspects which are persons of mental capacity, intoxicated persons and Minors. First and foremost, what is it about minor? A minor is a person who has not yet reached his 18th birthday. When the age of majority was reduced from 21 to 18 in 1969 the practical importance of rules governing minors? contracts was reduced since most of the decided cases concerned persons aged between 18 and 21. Problems today are most likely to arise with contracts of employment and hire purchase agreements according to Julie Clarke. 2017. The law governing minor? contracts show how the law must compromise between two principles. The first, and more important is that the minor must be protected against the own inexperience, The second is that in pursing this object the law should not cause unnecessary hardship to those who deal with minors. ...read more.

There are other elements are: 1. Offer and acceptance, 2. Legal obligation, 3. Lawful consideration, 4. Valid object, 5. Agreement not being declared void by Law, 6. Free consent, 7. Agreement being written and registered, 8. Capacity to contract has been discussed. It is clear that all contracts are agreements. Conclusion Back to the statement all agreement are not contract but all contracts are agreement. An agreement is termed a contract only when it is enforceable by law. All agreements are not necessarily legally enforceable. It can rightly be said that an agreement has a much wider scope than a contract. For example that agreements are not legally binding are an invitation to dinner or to go for a walk and its acceptance. These are agreements not contracts. An agreement does not necessarily imply a legal obligation on the parties to the agreement. It is import here to clarify what exactly is an obligation. Obligation is a legal tie which imposes upon a person or persons the necessity of doing or abstaining from doing definite act or acts. An agreement need not necessarily be within the framework of law and be legally enforceable. If it is, then it is a contract. A promises B to do physical harm to C whom, the latter does not like and B promises to pay A Rs. 1000 to do that, it cannot be termed as a contract because such an act would be against the law. Any agreement of which the object or consideration is unlawful is void and cannot be called a contract. It would be clear from what has been said so far that an agreement has a much wider scope than a contract. An Agreement implies fulfilling some agreed condition. It does not necessarily imply that the stipulated conditions conform to the law and are enforceable by it. It may be said that an agreement is the genus of which contract is the species. It also makes it clear that all agreements are not contracts but all contracts are agreements. ...read more.