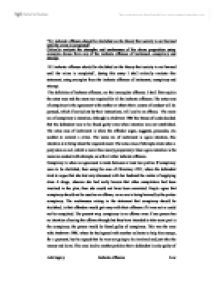 &quot;All inchoate offences should be abolished on the theory that society is not harmed until the crime is completed&quot; - Critically evaluate the strengths and weaknesses of the above proposition.

In Siracusa 1990 the Court of Appeal decided that the decision made in Anderson was not entirely correct. From another inchoate offence, incitement, the abolishment of inchoate offences may be seen in a different way. People suggesting or persuading another person to commit a crime is no harm to society unless the suggestion, persuasion or urge results in another person committing an offence. Some people feel that this inchoate offence should be abolished, as it is merely a suggestion to another person, who should know better. People also feel that it should be abolished as loopholes are being found such as in the case of Whitehouse 1977, where a man accused of inciting a young girl to have sexual intercourse with him, as intercourse did not take place the defendants conviction was quashed. The majority of people including myself feel that this inchoate offence should stay how it is. Without incitement people would get away with encouraging others to commit an offence. This inchoate offence can be to an individual or to the whole world, such as in Invictor Plastics ltd. ...read more.

A weak three stars, in view of my comments above.