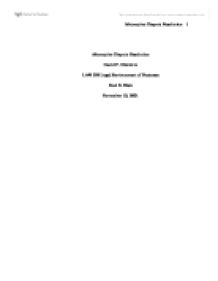 Alternative Dispute Resolution David P. Nicolette LAW 529 Legal Environment of Business Paul R. Blair November 10, 2001 Abstract The basic principles of alternative dispute resolution (ADR) are reviewed and discussed in relation to actual business disputes that were resolved through ADR. Alternative Dispute Resolution After a review of the usefulness and purpose of alternative dispute resolution (ADR), this paper examines represenative examples of business disputes that were resolved without recourse to court proceedings. The sample cases are examined by way of illustrating the fundamental principles of ADR. An Alternative to What? Even when all the participants act in good faith and none has dishonorable intentions, business contracts and transactions lead to conflict from time to time. Most conflicts are the result of differing interpretations of contractual obligations, differing assumptions that were inadequately addressed in the contract, implied responsibilities, or the scope of activities covered by a contract. Misunderstandings are common because of people's differing perceptions, backgrounds, assumptions, and priorities, as well as the natural ambiguity of human language, however carefully worded a contract might be (AAA, 2000). It is safe to say that dispute resolution is a good thing for business, since it allows business relationships to continue without the distraction of the dispute. So, why alternative dispute resolution? Historically, the standard mechanism to resolve business disputes was to go to litigation. While this guarantees a resolution - or at least, an end - to a dispute, it tends to be time-consuming and expensive. It can also leave both parties dissatisfied, even if the dispute is technically resolved according to the letter of the law. Hostile litigation can take so much time and use so many resources that neither side "wins" in a meaningful sense of the word. The prevailing disputant often enjoys only a Pyrrhic victory, since the cost of victory can be staggering (Corley, et al, 2001, p. 89). It is perhaps poetically just that the Pyrrhic War itself arose in part because one party in a contract dispute refused to accept a straightforward resolution. ...read more.

The option to resort to a more formal approach always remains open, if resolution cannot be reached otherwise. Applicability of ADR The application of ADR to civil disputes makes intuitive sense, but is it applicable to other types of disputes? Law may be categorized in a variety of ways, depending on how one wishes to analyze it. For purposes of this section, let us consider law under the categories enumerated by Corley, et al (2001, pp. 10-11): * Private Law, including Contract Law, Tort Law, and Property Law * Public Law, including Constitutional Law, Administrative Law, and Criminal Law. The most intuitive application of ADR lies in the realm of Private Law, and especially in Contract Law and Tort Law. Contract Law The focus of this course is on the legal environment of business, and in that context Contract Law is of primary interest. Clearly, the full range of ADR alternatives may be applied to Contract Law, as has already been mentioned. Tort Law ADR also applies very well to Tort Law. In this area, binding or non-binding arbitration can be a valuable alternative to the court system for resolving disputes between businesses and customers who feel they have been harmed by a product or wronged in a business transaction. Family Law Although this lies outside the scope of the course, an area of law to which ADR applies very directly and effectively is family law. The most productive ADR method in this area is mediation. Most intra-family disputes are solvable short of divorce or feud. What is needed is an impartial observer who can sort the facts from the emotions and help the parties arrive at a mutually acceptable resolution. Mediation is a powerful tool for conflict resolution in such disputes. Property Law It is possible that ADR could apply in disputes over property ownership or property usage rights, especially when the property in question has a long history of changes of ownership and/or is located in a region whose property law has changed during a time period relevant to the dispute. ...read more.

Mr. Carson is also a licensed automobile operator. Canadian Tire's attorneys argued the "spontaneous public adoption of a name ... becomes distinctive of the plaintiff's goods" (Newsbytes, 2001). Following the strict and fair set of rules WIPO has defined to govern arbitration of this kind (WIPO, 2001), Mr. Carson concluded "the spontaneous use of 'Crappy Tire' by the public is as a trade name or corporate name and not as a trademark or service mark," and "The Uniform Domain Name Dispute Resolution Policy does not extend to business names not associated with wares at the time of sale or used in association with the advertisement of services" (Newsbytes, 2001; ICANN, 2001). Thus, although Canadian Tire Corporation greatly desired to be associated officially with the name "Crappy Tire," Mr. McFadden's prior claim to the name was upheld. Thanks to the availability of professional arbitration, a lengthy and expensive process of litigation was avoided. Conclusion The development of alternative dispute resolution (ADR) as a rigorous and well-defined professional practice offers businesses a spectrum of options for dealing with disputes from which they can choose the most appropriate approach to a given dispute. As ADR becomes better understood and more widely practiced, business executives are learning to anticipate potential disputes in advance so that they can be avoided through proper construction of contract language. They are also learning to use procedures short of litigation to deal with disputes, such as negotiation, mediation, and arbitration. The history of ADR to date strongly indicates it can be a highly effective and beneficial alternative to litigation in many cases. While ADR initially found success in contract disputes between businesses, in handling consumer claims against businesses, and in family law practice, applications of ADR in other areas of law are becoming recognized and seriously explored. These developments may have far-reaching implications not only for the legal environment of business, for for that of society as a whole. ADR may be the long-sought cure for our excessive litigiousness, and that would be a "win-win" outcome all around. ...read more.