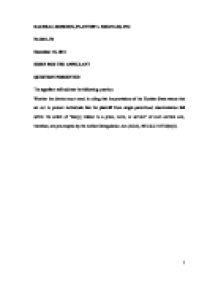 American Public Law Brief. RACHEAL ROBERTS, PLANTIFF v. BRIANAIR, INC - Whether the district court erred in ruling that the provisions of the Humber State statute that set out to protect individuals like the plaintiff from single parenthood discriminatio

RACHEAL ROBERTS, PLANTIFF v. BRIANAIR, INC No 2011.78 December 15, 2011 BRIEF FOR THE APPELLANT QUESTION PRESENTED The appellant will address the following question: Whether the district court erred in ruling that the provisions of the Humber State statute that set out to protect individuals like the plaintiff from single parenthood discrimination fall within the ambit of "law[s] related to a price, route, or service" of such carriers and, therefore, are pre-empted by the Airline Deregulation Act (ADA), 49 U.S.C 41713(b)(1). STATEMENT OF THE CASE Statutory and Regulatory Background At its very core, the pre-emption doctrine is a judicial tool with which the federal government defines the ambit covered by federal control of the subject when Congress has legislated pursuant to one of its enumerated powers. The legal claim to this doctrine lies in the US Constitution which provides: 'This Constitution and the Laws of the United States which shall be made in Pursuance thereof ... shall be the supreme Law of the Land; ... any Thing in the Constitution or Laws of any state to the contrary notwithstanding.' US Const. Article VI � 1, cl 2. These powers of pre-emption have been grouped under three categories: * Express Pre-emption * Field Pre-emption * Conflict Pre-emption. Field pre-emption and Conflict pre-emption are classified as sub-categories of implied pre-emption. In the case of field pre-emption, the courts will infer an intention to preempt state law if the federal regulatory scheme is so pervasive as to "occupy the field" in that area of the law. In conflict pre-emption, the court voids state law in cases whereby it is impossible for the private party to adhere to both federal and state law or where state law stands in the way of accomplishing the intention and purpose of congress.1 Finally is express pre-emption, where the federal statute explicitly states that it overrides state law. The starting point for the application of the doctrine of pre-emption is the fact that there is a basic presumption against pre-emption of ...read more.

In coming to this conclusion, the court stated: "we see no congressional purpose that would be served by denying to FAA-certified pilots, in the name of pre-emption, the protection of Hawaii's law from employment discrimination based on physical disability"17. The reasoning applied by the court was an extension of the Colorado Commission case. The court added disability discrimination laws to the areas excluded from pre-emption which already included laws prohibiting employment discrimination based on race, colour, religion, or sex18. We submit that this priciple should be applied to the case at hand. Ms Roberts, by being discriminated against for her status as a single mother finds herself in a similar situation to the victims of discrimination in the other cases. In the Colorado Court of Appeal case of Belgard v United Airlines,19 the Court was faced with the task of determining whether or not a law relating to handicap discrimination was sufficiently related to the airline 'prices, routes and services'. In ruling that it was, the Court stated that "any law...that restricts an airline's selection of employees, based on their physical characteristics must necessarily have a connection with...the services to be rendered by that airline".20 It can be deduced from this ruling that the physical handicap as seen in this case is related to the services rendered by the airline. The on-the-job performance of these employees could be affected and could be significant in the commercial aspects of the operation of United Airlines. The facts of this case are however different from the one in question here. The on-the-job performance of Ms Roberts is unaffected by her status as a single-mother. The defendants also stated that her perfomance, in spite of the two incidents remained "satisfactory". The extensive support of case law available in the cases listed above show that employment standards remain under state policing powers in the eye of the court. For example, in the racial discrimination context, courts generally agree that neither air safety nor market efficiency is appreciably diminished by the operation of state laws forbidding racial discrimination. ...read more.