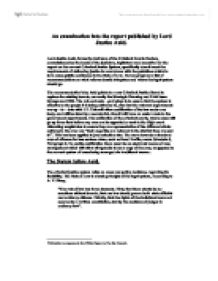 An examination into the report published by Lord Justice Auld.

An examination into the report published by Lord Justice Auld. Lord Justice Auld, formerly chairman of the Criminal Courts Review, commissioned by the heads of the judiciary, legislature and executive for the report on the current Criminal Justice System, specifically does it meet the requirements of delivering justice in accordance with the guidelines which in turn cause public confidence in the Rule of Law. He has prepared a list of recommendations on what reform should take place and where the legal system should go. The recommendation's by Auld points to a new Criminal Justice Board to replace the existing boards, currently the Strategic Planning and Trial Issue Groups and IBIS. The role each sub - part plays is to ensure that the system is effective to the people it is being delivered to, also that the relevant departments are up - to - date with I.T. This will allow codification of the law under one body, and will be aided by a secretariat, thus it will have an easier route to the government departments. The unification of the criminal courts, where cases will go up three tiers before any case can be appealed or sent to the High court. Allocating magistrates to ensure they are representative of the different ethnic cultures in the area and 'their expertise are relevant in the district they are sent to'1. This has been applied to jury selection also. The move towards a standard code of offences for less serious crime, such as Road Traffic, under Schedule 3, Paragraph 3. To enable codification there must be an electronic means of case management which will allow all agencies to see a copy of the case, as opposed to the current system of cases being managed via traditional means.. ...read more.

James Report.. The final point regarding requires the judge to instigate the fitness to plead, innocent or guilty, should be left to the judge, would enable the case to be judged with a specialist knowledge. "There is evidence that people who know they will get a custodial sentence give a fake plea in order to waste the courts time. By getting the plea from the start will ensure that 'cracked cases' are kept to a minimum, where there are procedural improprieties in the turning up of experts and witnesses". Liberty .. CRIMINAL JUSTICE BOARD The Main points are referred to: 1. A new board to replace 'Strategic Planning and Trial Issues Groups' 2. Aided by their Local boards. 3. A Criminal Case Management Agency 4. A Criminal Justice Council Lord Auld wants an efficient structure with clear lines of communication and to identify accountability. This will allow more integration and a new electronic case management system. The current system relies on three boards, two were mentioned above and the third is the technology department. At present there is no overall direction for the criminal justice system, however what Auld proposes has not taken consideration of the availability of funds needed to undertake such a movement. Justice's response "Auld failed to set overall objectives for reform of the system and to supply a framework for reform". The response of the Bar Council and LAG believe that the creation of the new boards would allow faster implementation of electronic case management, which would enable one case to be viewed by various departments. ...read more.

Auld's report is not a coherent framework for change, piece - meal initiatives provide a way of change over time through small changes in the framework, this is a slower progress but, it can be sustained, most of what Auld researched did not form part of the White Paper. His report does not justify why the courts should take such a direction, the way funds will be raised and allocated in taking such measures. With any report there are bound to be people who oppose it. Especially those that are affected most by it. Various bodies of the government go due to reform and it is not safe to streamline when the ideas you wish to occur, like seeing all the defendants, one by one, having a perfect jury, all the necessary evidence and witnesses and keeping within time limits, the costs associated with seeing each person and being able to ensure that each person is getting the best treatment. There is scope for improvement but it cannot be free. The system has contained in it the dictum of the 'Separation of Powers', this enables the three functions of the state to work alongside each other, where neither wields too much power. The Home Office, (executive function), has continually interfered with the judiciary, either due to conflicting policy, (For example Myra Hindley, and the Guildford 4), due to their release dates, which were quashed. Only by the 'executive', interfering with the 'legislature' system. Since 1981 there has been performance measures issued to magistrate courts, by the Home Office71, MIS related to key indicators to be achieved by the Magistrates. This was to make the court a business as such. ...read more.