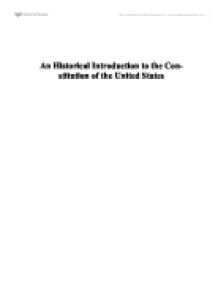 An Historical Introduction to the Constitution of the United States

The ordeal by water and fire were the most common ones. The ordeal by water was used to determine, whether a women was a witch or whether she was simply a female human with some knowledge of herbs and cures. The practice was to bind the woman's hands and feet and to throw her into blessed water. If she floated at the water's surface, the woman was considered guilty, because the holy water rejected her. But if she sank, she would be found innocent - event if she drowned68. The ordeal of fire grounded on the belief that Divine Providence would spare an innocent human being from severe suffering and physical harm. To determine a suspect's guilt by the ordeal of fire meant that the accused individual was forced to put his hand or foot into an open fire until it was significantly burned. After a while, an authority would look at the wounds and would decide from their severity over the suspect's innocence or guilt. In England the trial by ordeal was still common in the twelfth and thirteenth century until it was finally replaced by the jury trial, which to the English meant "twelve men, good and true"69. Nevertheless, serious offences against the doctrines of the church and the Crown continued to be trialed by judges of the Star Chamber70, who didn't accept jury trials. Luckily, an institution like the Star Chamber never existed in the U.S. and jury trials were quiet early introduced to the American legal system. 3. Jury trials in America In the American colonies the tradition of jury trials and the calling on witnesses was introduced in order to prevent the tyranny of royal judges and officials, like it had happed in England. The jury trial secured, that the people, who lived under the law and were charged with crimes, were judged by their fellow citizens. Alexis Toqueville wrote in his classic study "Democracy in America": "The institution of the jury places the real direction of society in the hands of the governed and not in that of the government" 71. ...read more.