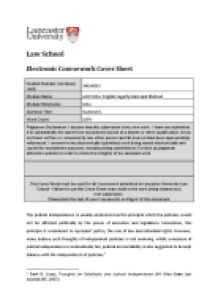 Transfer-Encoding: chunked ﻿Student Number: 34614893 Module: 101x Law School Electronic Coursework Cover Sheet Student Number (on library card): 34614893 Module Name: LAW.101x: English Legal System and Method Module Mnemonic: 101x Question Title: Question 1 Word Count: 1693 Plagiarism Declaration: I declare that this submission is my own work. I have not submitted it in substantially the same form towards the award of a degree or other qualification. It has not been written or composed by any other person and all sources have been appropriately referenced. I consent to my electronically submitted work being stored electronically and copied for assessment purposes, including being submitted to Turnitin (a plagiarism detection system) in order to check the integrity of my assessed work. This Cover Sheet must be used for all Coursework submitted in Lancaster University Law School ? failure to use this Cover Sheet may result in the work being treated as a non-submission. Please start the text of your Coursework on Page 2 of this document The judicial independence is usually understood as the principle which the judiciary would not be affected politically by the power of executive and legislature. Sometimes, this principle is considered to represent justice, the rule of law and individual rights. However, many believe such thoughts of independent judiciary is not enduring. ...read more.

If facing too much pressure from the forces outside the courtroom, judges may or may not admit particular evidence to serve certain purpose [judiciary.gov. 2018]. From there, they could direct the jury or pass sentences unfairly. Such scenario is immoral and unacceptable in a Democracy. Although the importance of independent judiciary is clear, its practical effectiveness is usually put in question [judiciary.gov. 2018]. To be precise, judges are immune to any prosecution relate to their execution of judicial function.[5] Also, in the course of hearing cases, judges can not be sued for defamation for whatever they say to parties and witnesses. What is more, the duty to ensure justice for the people is merely considered as the responsibility carried by the judges [lawteacher.net. 2018], which is quite vague and questionable. It should be acknowledged that judges are human as well, they are the products of the society. They they can be fallible, bias and prejudice. those perspectives around the principle of judicial independence have created a belief that judges are above the law. However, such thinking of judiciary is incorrect. In fact, judges and any other individual are subject to the law in the same manner [judiciary.gov. 2018]. If a judge is found guilty for a criminal offense, it will be appropriate for the Lord Chief Justice or Lord Chancellor to refer him to the Judicial Complaints Investigations Office to remove him from current position [judiciary.gov. ...read more.