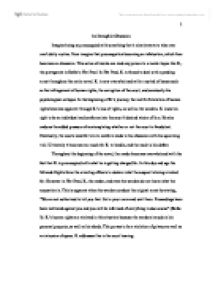 An Intangible Obsession- An Essay of Kafka's The Trial

An Intangible Obsession Imagine being so preoccupied with something that it slowly starts to take over one's daily routine. Now imagine that preoccupation becoming an infatuation, which then becomes an obsession. This series of events can lead any person to a mental lapse like K., the protagonist in Kafka's The Trial. In The Trial, K. is forced to deal with a pending arrest throughout the entire novel. K. is now overwhelmed with a myriad of issues such as the infringement of human rights, the corruption of the court, and eventually his psychological collapse. In the beginning of K.'s journey, the motif of violation of human rights becomes apparent through K.'s loss of rights, as well as the warders. K. loses his right to be an individual and conforms into the court's desired vision of him. He also endures the added pressure of contemplating whether or not the court is fraudulent. Eventually, the courts need for him to conform leads to his obsession with his upcoming trial. Ultimately it becomes too much for K. to handle, and the result is his defeat. Throughout the beginning of the novel, the reader becomes overwhelmed with the fact that K. is preoccupied with what he is getting charged for. In this day and age the Miranda Rights force the arresting officers to declare what the suspect is being arrested for. ...read more.

is first arrested the inspector states, "I can't even confirm that you are even charged with an offense, or rather I don't know whether you are" (Kafka 12). This proves that there is a serious lack of organization in the court system. How can a superior official not know the circumstances of the arrest? How is that just? In addition, the court's lack of decisiveness is also portrayed through the Painter's explanation of the three possible acquittals. For example: There are three possibilities, that is, definite acquittal, ostensible acquittal, and indefinite postponement. Definite acquittal is, of course, the best, but I haven't the slightest influence on that kind of verdict. As far as I know there is no single person who could influence the verdict of definite acquittal. (Kafka 152-153) The Painter states that there is only one definite acquittal, however, the chance of that is equivalent to winning the lottery. The one statement that stands out in that quotation is how "no single person" can manipulate a definite acquittal. This reiterates that the court is extremely corrupt because in an organized court system the fate of a person is not decided by an influential person. For example, K. is at the courtroom when he comes across the woman who is working behind the desk. She is trying to offer him help through her connection with the Examining Magistrate. ...read more.

He recognizes this when: Two men came to his lodging. In frock coats, pallid and plump with top hats that were apparently irremovable...Without having been informed of their visit, K. was sitting also dressed in black in an armchair near the door, slowly pulling on a pair of new gloves that fitted tightly over the fingers, looking as if he were expecting guests. (Kafka 223) This quotation sums up K.'s emotional downfall through the overwhelming symbolism. For example, K. dressing in black symbolizes the end of both the lingering trial as well as acknowledging his death. Also, it is bizarre that K. does not expect visitors, yet waits so intently near the door, putting on his new gloves before he knows he is going outside. This represents the overwhelming presence of his case because K. is assuming the outcome of the situation. This confirms that K. has become wholeheartedly obsessed with his trial because he is devoting a year to not die for it. Kafka takes the readers, as well as K., on an absolute whirlwind throughout the novel. K.'s downfall is expressed by showing the three separate stages of his preoccupation, his infatuation, as well as his obsession with his arrest. This is shown throughout the year through a series of events such as the mistreatment of human beings, the corruptness and disorganized court, as well as K.'s need to have complete and utter control over his case. There were plenty of questions left unanswered throughout The Trial, however the only one that was answered was the fate of K. ...read more.