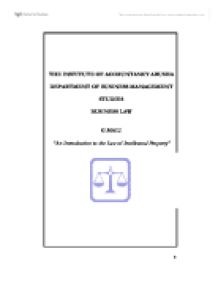 An Introduction to the Law of Intellectual Property

THE INSTITUTE OF ACCOUNTANCY ARUSHA DEPARTMENT OF BUSINESS MANAGEMENT STUDIES BUSINESS LAW G.MALI "An Introduction to the Law of Intellectual Property" INTELLECTUAL PROPERTY Introduction The purpose of business law is to regulate the conduct of business in a given society. In so doing it protects both social and economic interests of the people at the same time promote competition among businessmen. Free competition if not regulated can abrogate the general nature and purpose of law in the society. In this context some interests such as intellectual property rights need to be protected for the benefits of the inventor. Intellectual Property or IP What is intellectual property? It is the property springing from human intellect, intellect being an ability to think in a logical way and understand things. Intellectual property therefore can be an idea, design, formula resulting from human intellect and the law prevents others from using it without his authority. The law of Intellectual property allows people to own their creativity and innovation in the same way that they can own physical property. The owner of IP can control and be rewarded for its use, and this encourages further innovation and creativity to the benefit of us all. In some cases IP gives rise to protection for ideas but in other areas there will have to be more elabouration of an idea before protection can arise. It will often not be possible to protect IP and gain IP rights (or APRs) unless they have been applied for and granted, but some IP protection such as copyright arises automatically, without any registration, as soon as there is a record in some form of what has been created. The four main types of IP are: * patents for inventions - new and improved products and processes that are capable of industrial application * trade marks for brand identity - of goods and services allowing distinctions to be made between different traders * designs for product appearance - of the whole or a part of ...read more.

this rights of the injured party, in such case such injured party may only require that such measures be undertaken as to achieve this effect. d) The injured party may require that the copies and equipment be delivered to him, in whole or in part, for an equitable price which shall not exceed production cost. Exceptions Where the infringement was neither intentional nor negligent the demands of injured party as said above may be set aside and require the defendant indemnify in money the injured party if execution of aforesaid demands would produce for him a serious and disproportionate injury. The damages payable shall be such an amount as would have constituted an equitable remuneration had the right been granted by contract. Payment of such damages shall constitute the injured party's consent to utilization within customary limits. (Section 41) 3. Offences and legal sanctions (sect. 42) Apart from civil remedies available to the injured party, the infringer may also be charge for criminal offence under the same Act. It is provided by section 42(1) of the Copyright and Neighbouring Rights Act, 1999 of the laws of Tanganyika that "any person who knowingly violates or causes to be violated, the right protected under this Act shall be liable to- a) A fine not exceeding Tsh.5, 000,000. or to imprisonment for a term not exceeding three years or both, for the first offence if the infringement was on commercial basis; and b) A fine not exceeding Tsh.10, 000,000. Or to imprisonment for a term not exceeding five years or both, for each subsequent offence if the infringement was on commercial basis. It is also an offence for a person to import or distribute copies or folklore4 copies derived from the United Republic of Tanzania, or copies of translations, adaptations, arrangement or other transformations of such expression of folklore made abroad without authority. A person found guilty of that offence is liable to a fine not exceeding Tsh.10, 000,000.or imprisonment for a term not exceeding ten years. ...read more.