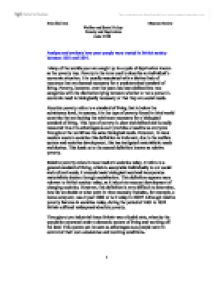 Analyse and evaluate how poor people were treated in British society between 1601 and 1834. Many of the worlds poor are caught up in a cycle of deprivation known as the poverty trap. Poverty is the term used to describe an individual's economic situation. It is usually associated with a distinct lack of resources that are deemed necessary for a predetermined standard of living. Poverty, however, over the years has been defined into two categories with the distinction lying between whether or not a person's economic need is biologically necessary or that they are social needs. Absolute poverty refers to a standard of living that is below the subsistence level, in essence, it is the type of poverty found in third world countries that are lacking the minimum necessary for a biological standard of living. This type of poverty is clear and defined and is easily measured thus it is advantageous as it provides a baseline as everyone throughout the world has the same biological needs. However, in most modern western societies this definition is irrelevant, due to the welfare system and societies development, this has instigated materialistic needs and desires. This leads us to the second definition known as relative poverty. Relative poverty exists in most modern societies today. It refers to a general standard of living, which is acceptable individually to our social and cultural needs, it exceeds basic biological need and incorporates materialistic desires through socialisation. This definition appears more relevant to British society today, as it takes into account development of changing societies. However, this definition is very difficult to determine, how do we decide at what point in time necessity includes, for example, a home computer, was it year 2000 or is it today in 2005? Although relative poverty features in societies today, during the period of 1601 to 1834 Britain suffered widespread absolute poverty. Throughout pre industrial times Britain was a feudal state, whereby the population operated under a domestic system of living and working off the land. ...read more.

Protestantism is generally concerned with 'self fulfilment' as opposed to Catholicism that concentrates on 'helping your neighbours/Christian charity'. Therefore whilst some were recognising the deteriorating Poor Law, the lay man was experiencing it first hand yet still no practical alternative was available. It is at this point that we see the introduction of the Speenhamland System, although it was never formally legislated it is evident it was a method of pacifying the poor when nothing else was addressing the failing Poor Laws and the plight of the poor. The Speenhamland System attempted to address the acute rural economic crisis and low subsistence levels, in essence it was concentrating on those in absolute poverty. The system was designed to supplement low wages on a scale that measured entitlement against the cost of bread and the number of heads in a family. The introduction of this system of allowances was widespread even though it was never legislated. The system has been criticised as it led able bodied labourers to thinking they were entitled to parish relief when unemployed and encouraged idleness and lack of respect towards employers. This is hardly surprising when you consider the fact that, employers would purposely keep wages low, in the knowledge that the allowance system would 'top' them up, therefore maintaining and increasing their profits for them. Reverend Thomas Malthus, who was an enlightened thinker, believed similar concepts to Protestantism. Notably, that individuals were in control of their own destinies, and it was therefore up to the individual to create their own standard of living, by using their capacities for rational thought. It is therefore no surprise that Malthus criticised the allowance system. He believed that it encouraged population growth by rewarding large families with bonuses. Malthus also noted that this population growth would even at the optimistic level outstrip the means of subsistence. Malthusian concerns regarding population growth are still evident in modern day history, for example in India and China in the 1990's. ...read more.

must therefore be seen as an evolution from this principle and to some extent the Speenhamland system. Governments throughout history have tried to instigate and install the work ethic into society and this can obviously only be viable if the population is financially more secure working than not working. It is evident that the poor were treated appallingly throughout the period 1601 to 1834. Conditions were unjust especially following the harsher more punitive Poor Law of 1834. However, the social, political, religious and economic changes during the period had an enormous impact and influence on the 1834 legislation. These influences have been discussed throughout this essay, it is evident that all these changes were contributing factors to the emergence and creation of the harsher, more punitive, stigmatizing and utilitarian or secular Poor Law Amendment Act of 1834. The act of 1834 has been criticised by the majority of historians, in many ways it failed to recognise the true causes of poverty and certainly failed to address them in a humanitarian manner. However, it can be viewed, not as the birth of British welfare, but initially, a tool of social control and the eventual evolution, of the government to address social welfare issues. The days of laissez-faire were diminishing rapidly aided by the massive transition from the domestic feudal system to industrialisation, secularism and eventual democracy and the British welfare state of today. List of References 1. Anon, no date, Enclosures [online] available from http://cla.calpoly.edu/~1call/enclosures.htm [accessed on 30/09/2005]. 2. Anon, no date, Introduction to Social Policy [online] available from www2.rgu.ac.uk [accessed on 22/09/2005]. 3. Anon, no date, Poor Laws [online] available from www.users.ox.ac.uk [accessed on 27/09/2005]. 4. Blakemore, K, 1998, Social Policy an Introduction. Buckingham, OU Press. 5. Fraser, D, 2003, The Evolution Of The British Welfare State. Hampshire, Macmillan. 6. Taylor, D, 2002, Mastering Economic and Social History. Hampshire, Macmillan. 7. Walsh, M, Stephens, P and Moore, S, 2000, Social Policy and Welfare. Cheltenham, Stanley Thornes. 8. Wright, D.G, 1989*, Democracy and Reform 1815-1885. Essex, Longman Group Ltd. *N. ...read more.