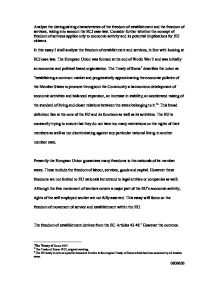 Analyse the distinguishing characteristics of the freedom of establishment and the freedom of services, taking into account the ECJ case-law. Consider further whether the concept of freedom of services applies only to economic activity and its potential implications for EU citizens. In this essay I shall analyse the freedom of establishment and services, in line with looking at ECJ case law. The European Union was formed at the end of World War 2 and was initially an economic and political based organisation. The Treaty of Rome1 describes the union as "establishing a common market and progressively approximating the economic policies of the Member States to promote throughout the Community a harmonious development of economic activities and balanced expansion, an increase in stability, an accelerated raising of the standard of living and closer relations between the states belonging to it.2" This broad definition lies at the core of the EU and its functions as well as its activities. The EU is constantly trying to ensure that they do not have too many restrictions on the rights of their members as well as not discriminating against any particular national living in another member state. Presently the European Union guarantees many freedoms to the nationals of its member states. These include the freedom of labour, services, goods and capital. ...read more.

As the freedom of movement of persons or labour does not include self employed individuals. To simplify the individual is allowed to cross over to member states without restrictions to provide a service. Or that the recipient of the services can travel to another member state to obtain a service. In both these cases one individual is required to cross over to a member state where they are not permanent or established. This right extends to services provided from within the individuals own state via telecommunication,12 without physically having to cross borders to provide or receive the service. The freedom of establishment and freedom of service overlap in the area of self -employed workers. The freedoms can apply to a self employed worker who is the establishment himself as well as the service provider. In the case of Van Binsberg, advocate Mayras highlighted that all citizens should receive equal treatment on grounds of nationality underpinned workers, services and establishments alike.13 In comparing Articles 39 on workers and Articles 43 on establishment it is evident that each person has asserted their freedom of movement14 however the difference in each case is whether they are employed or self employed. ...read more.