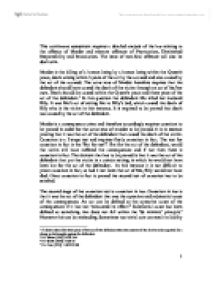 Analysis of the law relating to the offence of Murder and relevant offences of Provocation, Diminished Responsibility and Intoxication.

The loss must be sudden, due to this requirement women cannot take this defence because they mentally work differently to men and their actions are merely not spontaneous.22 Marie Fox has criticised this stating that the judiciary does not understand a women's position23. Where the defence of provocation is relied upon, then to succeed the jury must consider the existence of certain characteristics of a reasonable man. It was confirmed in R v. Thornton (1995),24 that battered woman syndrome could be a relevant characteristic for the jury to consider in a defence of provocation in a murder trail. The criterion is that the jury must be satisfied that the reasonable man would have done as the defendant did. This is the "objective" test based upon a hypothetical reasonable person. For a long time, the only characteristics, which could be attributed to the reasonable man, were age, sex and any personal idiosyncrasies that had some degree of permanence and were characteristic against which the provocation had been directed.25 Both of these subjective and objective criteria have given rise to problems for battered women. Kiranjit Ahluwalia,26 who after enduring many years of violence and humiliation from her husband, threw petrol into his bedroom, whilst he was sleeping in there, and set it alight. Her husband died six days later. She was convicted of murder at trail, her defence of provocation having been unsuccessful. On retrial she was convicted of manslaughter as the medical evidence was admitted. Court of appeal affirmed that as it was major depressions disorder that it could come under the ambit of Section 2 as diminished responsibility. The test of provocation seems to have become more subjective after the case of R v Morgan James Smith27. The effect of Morgan James according to Laurence Toczek28 is that 'mental characteristics, whether temporary or permanent, which reduce a defendant's powers of self-control can be taken into account by juries when the defence of provocation is raised'. ...read more.

Mo in proving herself under the conditions of the section may find it very difficult to prove her defence as there was no immediate threat at that time and the force used was unreasonable. In the case of Billy and John not being killed and suffering serious wound a charge under section 18 of the Offences Against the Persons Act (OAPA) 1861 can be brought against Mo. The actus reus of s.18 requires that the defendant should cause Grievous bodily harm (GBH) or wound to the victim. The mens rea of s.18 is intention to cause grievous bodily harm or wound46. Mo will be guilty under s.18 if it can be established that she certainly realized that she is likely to cause grievous bodily harm through her act. Provocation and diminished responsibility are not defences to assaults and are special defences to murder only. This is due to the outlying discretion with the courts in sentencing for non-fatal offences against the person. Voluntary intoxication however might afford a defence to Mo. It will only be a defence to s.18.47 If Mo can successfully plead the defence of voluntary intoxication then an alternative for the prosecution would be to bring a charge under s.20 of OAPA 1861. Under s.20 Mo can be guilty of inflicting grievous bodily harm or wound if she realizes that she is likely to cause some bodily harm to Billy and John.48 Realization here is used in the context of subjective recklessness. It is probable that Mo will be guilty under s.20.49 Involuntary intoxication if proved can be a defence to a charge of s.18 and s.20. If Billy and John die as a result of Mo's death then a probable charge of murder will be proved against her. Appropriate defences from the act against Billy would be diminished responsibility and voluntary intoxication. For the act against John, even provocation could be an effective defence. If however the two victims survive then Mo is likely to be convicted under S.20 with a possible defence of voluntary intoxication to a charge under s.18. ...read more.