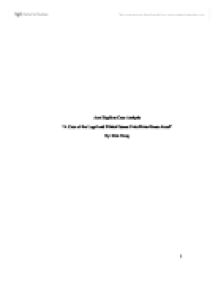 Ann Hopkins Case Analysis "A Case of the Legal and Ethical Issues PriceWaterHouse faced" By: Kim Dang While our culture has made progress against sexism within the past decade, the sad truth is that sexism and sexual discrimination still exists. Several reports and stories have been publicized in the past few years regarding the treatment of women in the workplace. Women have a harder time getting higher positions of authority at work than men, and are often paid a salary much lesser than their male counterparts. The Ann Hopkins case represents the legal and ethical issues of a corporate structure. Ms. Hopkins was a dedicated, able, and intelligent employee of PriceWaterHouse Coopers who believed that she would be next in line for a partnership with the firm. In her years with PriceWaterHouse, Ms. Hopkins has brought much to the company. She has successfully completed big projects as project manager (this includes the State Department, Farmers Home Credit, and the Bureau of Indian Affairs projects). Because of the successful outcomes of these big projects, Ann Hopkins believed that she will become the next partner for PriceWaterHouse Coopers. The outcome of the case was that PW decided to put her partnership status on "hold" due to her interpersonal skills. However, because the decisions are made by existing partners whom were mainly men, there were impressions that Ms. ...read more.

Her lack of femininity should not be a factor in why she should not be made a partner. Another issue that presented itself was that in order to be made a partner of the firm, at least 75% of the votes had to be in agreement. Why then did PWC admit one candidate who had support from only 14 of the 30 partners, while Ann Hopkins had 13 of the 32 partners support? This should raise a few eyebrows in terms of if a rule was already made, why then is their an exception made for this male candidate and no exception was made for Ann Hopkins? This further indicates that PWC is not in accordance with the EEOC and is in violation of the Title VII of the Civil Rights Act by making an exception for a male employee, but not giving the same exception to a female employee. If I were upper management in PWC's position, there are several things I would do in order to avoid any whistle blowing on behalf of Hopkins. First off, it was stated that most of the partners in the company were male, except for 7. Why then were the 7 women not included in the voting of new partners? PWC needs to reinstate their decision and allow for the seven women to voice their opinions. ...read more.

� Given this stage, these men are not showing their loyalty of the company's business ethics. Because they are discriminating Hopkins based on her gender, they are violating PWC's code of ethics. The example of the two partners who withdrew their decisions are not doing what they feel is right, but what others feel is right. They are violating their own moral ethics and the company's code of ethics. In my position, I would review the company's business ethics again. I would also ask myself "would I and the Company feel comfortable from a moral, ethical and legal standpoint?" If the answer is "yes", then the action is probably aligned with the corporate philosophy. If my answer is "No", then I need to review my actions with an upper manager or with the Company's Law department before proceeding to my final decision. PWC should value communication and "whistle blowing" because it performs a valuable function in maintaining high ethical standards of conduct and will reduce the risk to the company, its employees, directors and stockholders from a conduct that does not meet the Company's expectations. Following these guidelines will prevent PriceWaterHouse Coopers from a lawsuit which will affect not only their financials, but also their reputation from talented employees who are seeking to join PWC. By allowing sexual discrimination to occur in the workplace, and also with upper management, they are not following the philosophy of legal and ethics. ...read more.