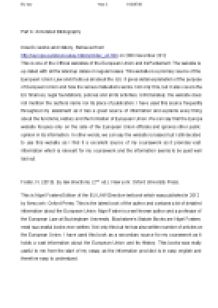 Annotated Bibliography - How the EU works and History.

﻿EU law Year 2 11058706 Part A: Annotated Bibliography How EU works and History, Retrieved from http://europa.eu/about-eu/eu-history/index_en.htm on 26th November 2012 This is one of the Official websites of the European Union and its Parliament. The website is up dated with all the latest up dates on regular bases. This website is a promary source of the European Union Law and it tells us all about the EU. It gives detail explanation of the purpose of European Union and how its various instuations works. Not only this, but it also covers the EU finances, legal foundations, policies and all its activities. Unfortunately, the website does not mention the authors name nor its place of publication. I have used this source frequently throughout my assisment as it has a great source of information and explains every thing about the functions, History and the formation of European Union. We can say that the Europa website focuses only on the side of the European Union officials and ignores other public opinion in its information. In other words, we can say the website is biased but I still decided to use this website as I find it a excellent source of my coursework as it provides vast information which is relevant for my coursework and the information seems to be quiet well laid out. Foster, N. (2010). Eu law directions. (2nd ed.). New york: Oxford University Press. This is Nigel Fosters Edition of the EU LAW Direction textbook which was published in 2012 by New york: Oxford Press. ...read more.

An invitation to participate in this steel and coal industry was offered and this had led to the creation of the European Coal and Steel Community (ECSC). The treat was signed in 1951, in Paris to give effect to the ECSC between the original six countries, Belgium, The Netherlands, Luxembourg, France, West Germany and Italy. During this period Uk was also emphasized to sign the Treaty but UK did not agree as it did not identify itself as a European Country and declared that they are well able to stand in int own two feet. This was seen as UK?s link with both Commonwealth States and United States. Moreover, the ECSC was seen as being a way of promoting Co-operation between countries and as means of collecting raw materials for was from the Member States in order to establish a common market in coal and steel and to get control in all investments in those areas. In 1952 the European Defense Community (EDC) Treaty was signed by the original six countries. Later in 1954, France does not succeed requesting to attenuate the supernational characters of the European Defense Community (EDC) and therefore rejects the idea of European Defense community (EDC) and also EPC treaties which then leeds to the agreement of Federal Republic of Germany into NATO and the Western European Union (WEU) was formed. After the formation the UK agreed to maintain forces in Germany. In 1955, Rene Mayer was elected as the president of ECSC high authority and int he same year the Benelux memorandum proposed a Treaty giving collaboration in fields of transport, energy, atomic energy and creation of a common market. ...read more.

The changes focused on the enlargement and introduced the necessary changes which were required in order to cope with the 2004 enlargement and to prepare for the expansion of the European Union into central of Eastern Europe. Furthermore, In 2005 the Treaty Established a Constitution for the Europe in order to bring it all under one document, which was first rejected in a referendum in France and later in Netherlands. The latest Treaty was signed in 2007 september, the Treaty was known as the Lisbon Treaty 2007. It made extensive reform. It brought a an end to the European Community, abolished the old European Union structure and made a new allocation of competencies between the European Union and the Member states. Not only this but the Treaty of Lisbon did reform several internal and external policies, in particular, it did enable the institutions to legislate and take measures in new policy areas. The European Community is to be amended and to be re-named as ? The Treaty on the Functioning of the European Union? (TFEU) and amends the Treaty of European Union and the ?three pillars? to merge into one single ?European Union? which will have have significant impact on the Member States sovereignty in the areas which were based on intergovernmental co-operation. On 1st of December 2009, Treaty of Lisbon finally came into force. This treaty took Europe into the 21st century. Further more, the European Union has gone through significant changes over the last 60 years and did go way beyond the founding fathers dreams of creating a United States of Europe through the theories of integration. ...read more.