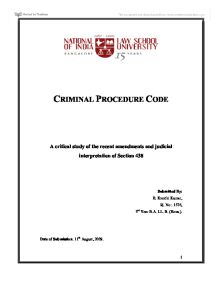 Anticipatory Bail under CRPC. A critical study of the recent amendments and judicial interpretation of Section 438

CRIMINAL PROCEDURE CODE A critical study of the recent amendments and judicial interpretation of Section 438 Submitted By: B. Kranthi Kumar, Id. No : 1576, 3rd Year B.A. LL. B. (Hons.). Date of Submission: 11th August, 2009. Introduction In recent times, Section 438 was in news as Varun Gandhi, grandson of late Prime Minister Indira Gandhi, applied to the Delhi high court for anticipatory bail stating that the allegations made on him about the anti-Muslim speech was a conspiracy to spoil his political career and tarnish his secular image in a criminal case filed against him by the directions of the election commission. The Delhi High Court using its power under Section 438 of Criminal Procedure Code (Cr.P.C), allowed the bail petition by making an order that if the petitioner is arrested for the alleged offence he shall be released on bail. As we have seen above, Section 438 is a procedural provision that provides for release of the applicant who believes that he may be arrested on accusation of having committed a non-bailable offence and the section as amended by 2005 provides for itself certain guidelines to be followed by the courts which has jurisdiction to grant that bail. It is pre-arrest bail applied for release of the accused in anticipation of arrest and so it is called Anticipatory Bail. The Section nowhere uses the word anticipatory and rather it is a misnomer. The Section has been recently amended by the Criminal Procedure Code (Amendment) Act 2005 and Section 438 sub-clause (1) was replaced by a new sub-clauses (1), (1A) and (1B). The 2005 amendment made the presence of the applicant necessary when the court is giving a final order on the matter if the public prosecutor requests the court that such presence is necessary to meet the ends of justice. As a matter of practice the courts the court give notice to the public prosecutor and this was now made mandatory. ...read more.

In State of Assam and another v. R.K. Krishan Kumar and others19, the learned Single Judge of Bombay High Court issued direction under Section 438 to release the respondents, if arrested, on bail without even affording an opportunity to the appellants, i.e. the State of Assam and its Director General of Police in spite of they being made parties in each of the applications for anticipatory bail. In view of the conceded position that appellants were not heard by the High Court, the Supreme Court set aside the impugned orders on that ground alone.20 Two reasons can be made out from this provision firstly, that if the appellant comes to High Court or Court of Session for anticipatory bail, the court may not be in a position to appreciate the facts because the court will have a very vague idea of he facts or the version of the facts which the appellant present to that Court and secondly, it is a principle of natural justice that both the parties should be heard before giving a final order for anticipatory bail. The 203rd report of the law commission approved this amendment.21 2.3] Presence of Applicant A person applying for an anticipatory bail under Section 438 is not necessarily be present in all the cases of final hearing of the bail applications. But, it is only in such cases where an application has been filed by the Public Prosecutor for the presence of the petitioner and the court considers the presence of such person necessary in the interest of justice. Such a conclusion can be reached by the court after hearing both the parties. The petitioner would thus have an opportunity to present his side of the case while opposing the application filed by the Public Prosecutor. Where no such application has been filed by the Public Prosecutor, it may not be necessary for the applicant to be present at the final hearing of his application for anticipatory bail.22 This is provided in the new 2005 amended version of Section 438(1B). ...read more.

Arrest of the accused should be made by the concerned police officer during his course of his investigation under Section 41 of Cr.P.C if the officer-in-charge thinks so. Merely because an interim order is rejected or anticipatory bail petition is rejected the person can't be arrested as it interferes with the process of investigation by the police officer and also makes the provision loses its intention of the framers as observed in M.C. Abraham and another v. State of Maharashtra and others. The law commission in its 41st report also held the same that the proviso to section 438 shall be removed as it is already provided in Section 41 of Cr.P.C. Another amendment to Section 438, that the applicant should be present at the time of final hearing of the petition if the public prosecutor requests the court for the same. The affect of this provision is that if the application is rejected than the officer-in-charge can arrest the applicant according to section 438 (1) proviso and also it infringes the applicant right to appeal to the higher court. So, this provision must be either removed or it should be amended in such a way that the applicant will have his right to appeal. Every court while exercising its power under the court should grant according to the facts and circumstances of the case and should lay down certain conditions if the court thinks fit. No blanket order of anticipatory bail should be given. As said by the Gurbaksh Singh Sibbia case that anticipatory bail can be granted to even cases involving capital punishment as long the court thinks that the appellant deserves in that specific case. Whatever it might we have to keep in mind that arrest of a person takes away the personal liberty of a particular person so the court while acting on this special power should act in a more liberal manner according to the circumstances of the case and also it should make sure that it doesn't hamper in the investigation process of the case. ...read more.