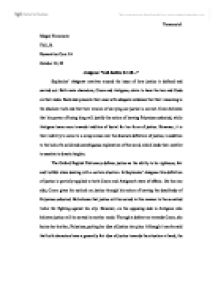 Megan Yamamoto Thill, B. Humanities Core 1A October 16, 20 Antigone: "and Justice for all..." Sophocles' Antigone revolves around the issue of how justice is defined and carried out. Both main characters, Creon and Antigone, claim to have the law and Gods on their sides. Each side presents their case with adequate evidence that their reasoning is the absolute truth and that their version of carrying out justice is correct. Creon believes that his power of being king will justify his action of leaving Polynices unburied, while Antigone leans more towards tradition of burial for her form of justice. However, it is their inability to come to a compromise over the absolute definition of justice, in addition to the lack of a solid and unambiguous explanation of the word, which leads their conflict to escalate to drastic heights. The Oxford English Dictionary defines justice as the ability to be righteous, fair and truthful when dealing with a certain situation. ...read more.

Although Polynices was his nephew, Creon is boldly steadfast in his edict for the reason that he must rule fairly over his city and show that he is not biased. His idea of justice is to rule with a level head through the laws of the gods and though laws of the land. Creon's main goal is to be an example to his people and lead them truthfully is which is why he must place the law into effect. He is even willing to put his niece to death for her actions against him in order to prove his steadfastness to the law of the land and gods. Thus, with his form of justice and power as a ruler, he leaves the traitor's body uncovered and uncared for as an example for those who might choose to challenge him. When juxtaposed to the definition of the Oxford English Dictionary, Creon's idea of justice does seem to be fulfilling its duty. ...read more.

As can be seen the issue of the definition of justice can never be truly resolved. The word has multiple meanings and it changes according to various individuals. The definitions used by Creon and Antigone are similar to each other; it is their points of view that make those definitions clash. Even in that context, the situation the word is being used in must be taken into consideration. Creon inferred justice to what he saw fit as a leader of a city, but Antigone used a similar definition to act in a fair and moral manner. To be fair, righteous and truthful when given a difficult situation takes more than just those words to truly handle the situation in a just style. Although each of the character's definitions of justice and the dictionary's definition held some truth, no one definition will ever suffice for the word and issue of dealing with justice. Yamamoto1 ...read more.

4 Stars. A good response to a tricky question.