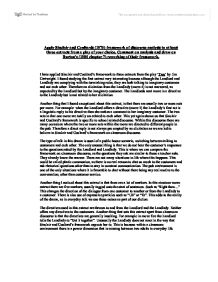 Apply Sinclair and Coultards (1975) framework of discourse analysis to at least three extracts from a play of your choice. Comment on analysis and draw on Burton's (1980 chapter 7) reworking of their framework.

Apply Sinclair and Coultards (1975) framework of discourse analysis to at least three extracts from a play of your choice. Comment on analysis and draw on Burton's (1980 chapter 7) reworking of their framework. I have applied Sinclair and Coultard's framework to three extracts from the play 'Two' by Jim Cartwright. I found studying the first extract very interesting because although the Landlord and Landlady are complying with the turn taking rules, they are both talking to imaginary customers and not each other. Therefore an elicitation from the Landlady (move 4) is not answered, as expected by the Landlord but by the imaginary customer. The Landlords next move is a directive to the Landlady but is not related to her elicitation. Another thing that I found exceptional about this extract, is that there are usually two or more acts per move. For example: when the Landlord offers a directive (move 5) the Landlady's first act is a linguistic reply to his directive then she makes a comment to her imaginary customer. ...read more.

Such as "Right then..." This changes the direction of the dialogue from one customer to another or from the Landlady to a customer. There is also use of expressive particles such as "Uh" or "Er". This adds to the reality of the drama, as in everyday talk we use these noises as part of our diction. The directives used in this extract are thrown to and from the Landlord and the Landlady. Neither offers any directives to the customers. Another thing that sets this extract apart from classroom discourse is that the directives are generally insulting. For example in move five the Landlord tells the Landlady to "Get it together". Unusually the Landlady does not react in the way that Sinclair and Coultard's framework expects her to. This is because within a classroom environment there is a power dimension that is missing between two adults in everyday life. The next extract is between two of the customers in the pub. ...read more.

Again, I can relate a lot of Sinclair and Coultard's framework to this extract, probably more so than the last extract because of the power dimension and the fact that they are both talking directly to each other. Another thing that I noticed, that I can relate to classroom discourse is that Roy prompts Lesley. In the framework it is stated that a prompt means that the teacher no longer just requests a response but now demands one. This is not something that we experience in everyday talk, as it's impolite to demand an answer in this way. Again there are a great deal of markers in this extract. In this 21-move extract there are 7 markers, in some moves there is more than one marker. For example in move 13 there are two: "Right" and "Ha". This is Roy moving from one line of interrogation to another. You can see that he doesn't want the other customers in the pub to hear his confrontation with Lesley. Which is why he changes direction when things get too heated. One other thing that I found interesting was move 20. ...read more.