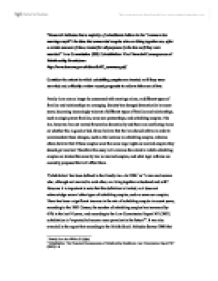 Are cohabiting couples treated as if they were married? Critically review recent proposals to reform this area of law.

"Research indicates that a majority of cohabitants believe in the "common law marriage myth": the idea that unmarried couples who are living together are, after a certain amount of time, treated for all purposes by the law as if they were married." Law Commission (303) Cohabitation: The Financial Consequences of Relationship Breakdown http://www.lawcom.gov.uk/docs/lc307_summary.pdf Consider the extent to which cohabiting couples are treated as if they were married and critically review recent proposals to reform this area of law. Family Law can no longer be concerned with marriage alone, as different types of families and relationships are emerging. Society has changed dramatically in recent years, becoming increasingly tolerant of different types of families and relationships, such as single parent families, same sex partnerships, and cohabiting couples. The law, however, has not moved forward as dramatically and there are conflicting views on whether this is good or bad. Some believe that the law should reform in order to accommodate these changes, such as the increase in cohabiting couples, whereas others believe that if these couples want the same legal rights as married couples they should get married. Therefore this essay will examine the extent to which cohabiting couples are treated the same by law as married couples, and what legal reforms are currently proposed that will effect them. 'Cohabitation' has been defined in the Family Law Act 19961 as "a man and woman who, although not married to each other, are living together as husband and wife". ...read more.

An imperative difference between marriage and cohabitation is the law regarding wills. Married couples are automatically given the right of intestacy and inheritance when their spouse dies, however mere cohabitants have no entitlement in the event of intestacy. This is demonstrated in the case of Saunders v Garrett [2005]11, in which Saunders applied under the Inheritance (Provisions for Families and Dependants) Act 197512 for reasonable provision to be made for him out of the estate of his same sex partner, however this application was refused. The unmarried couple can make appropriate provisions for each other by making wills, or it is possible in certain cases for the living cohabitant to benefit from the estate if the deceased leaves no relative within the statutory list. However these means of obtaining benefit from the death of a cohabitant are usually much more complicated than if the couple were married, and there is often a risk of the living cohabitant being left in a rather precarious position. The rights and responsibilities stated above are only a few of the legal differences between married couples and cohabitants. There are many others relating to issues from the inability of cohabitants to apply for pension sharing, to prison visiting rights. These vast discrepancies clearly demonstrate how the law predominantly does not treat cohabiting couples as if they were married, despite the public opinion that "common law marriage" exists. It is not entirely truthful to claim that 'common law marriage' no longer exists at all, as in the event that "government has collapsed ...read more.

She claimed the court should recognise same sex marriages that have been lawfully effected in other jurisdictions, or common law should recognise her Canadian marriage, or the court should declare that the MCA is incompatible with the HRA. The claim was dismissed on the basis that this was "an area of social, political and religious controversy" that the European Court of Human Rights (ECtHR) did not want to interfere with. In conclusion, it appears inevitable that the law will increasingly grant more rights to cohabiting couples. The law must adjust in order to maintain fairness and to accommodate a rapidly changing society, and this has been somewhat acknowledged in recent cohabitation case law. Same sex cohabiting couples are now given greater legal rights than ever before, if they enter into a Civil Partnership then in effect they have greater rights than heterosexual cohabiting couples, the rationale for which being that heterosexual couples can choose to marry. Current reform proposals will dramatically change this area of law, giving cohabiting couples more rights and courts more power. It seems highly doubtful, however, that cohabitants will ever be given rights which equate to those of a married couple, or even close. To do this would be seen to be condoning cohabitation and disregarding the sanctity of marriage, and as marriage is an essentially religion institution, to do this would have major repercussions on any government that enforced it. Therefore the law is able to offer cohabitants enough rights to make court proceedings fair, however if they desperately seek the same rights as a married couple, they will have to marry. ...read more.