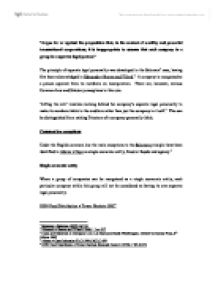 Argue for or against the proposition that, in the context of wealthy and powerful transnational corporations, it is inappropriate to assume that each company in a group is a separate legal person.

"Argue for or against the proposition that, in the context of wealthy and powerful transnational corporations, it is inappropriate to assume that each company in a group is a separate legal person." The principle of separate legal personality was developed in the Salomon1 case, having first been acknowledged in Edmunds v Brown and Tillard.2 A company is recognised as a person separate from its members on incorporation. There are, however, various Common Law and Statutory exceptions to this rule. 'Lifting the veil' involves looking behind the company's separate legal personality to make its members liable to the creditors rather than just the company in it self.3 This can be distinguished from making Directors of a company personally liable. Common law exceptions Under the English common law the main exceptions to the Salomon principle have been identified in Adams v Cape as single economic entity, fraud or fa�ade and agency.4 Single economic entity Where a group of companies can be recognised as a single economic entity, each particular company within this group will not be considered as having its own separate legal personality. DHN Food Distribution v Tower Hamlets LBC5 It was held that a group of companies was a single economic unit, thus enabling the group to claim compensation on the compulsory purchase of land even ...read more.

not enough to establish intent.17 Wrongful trading18 This occurs where Directors continue to trade when the company is known to be insolvent. An application can only be made if a company has gone into insolvent liquidation. A double test was developed and then verified in Re Produce Marketing Consortium (No 2):19 A Director of a company ought to reach the same conclusions of a diligent person having both (a) the general knowledge, skill and experience that may reasonably be expected of a person carrying out the same functions as are carried out by that director in relation to the company, and (b) the general knowledge, skill and experience that that director has. Other jurisdictions The USA approach to separate legal personality is not consistent with that of the UK. It is believed that multinationals have deep pockets and so, where justice and fairness requires it, they should deepen their pockets and give more money. There is some similarity with the English approach in that the veil will be lifted where companies are being used fraudulently. This can be shown in US v Milwaukee Refrigerator Transit Co20- "Where the notion of legal entity is used to defeat public convenience, justify wrong, protect fraud or defend crime, the law will regard the corporation as an association of persons." ...read more.