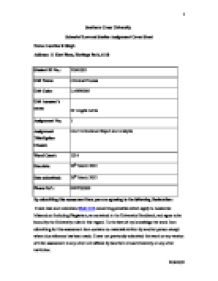 Australian Court vist report. In observing the R -v- Spina case there were many key participants that were Identified in the courtroom.

Southern Cross University? School of Law and Justice Assignment Cover Sheet Name: Lourine K Singh Address: 11 Kew Place, Heritage Park, 4118 Student ID No.: 21961395 Unit Name: Criminal Process Unit Code: LAW00050 Unit Assessor's name: Dr Angela Adria Assignment No.: 1 Assignment Title/Option Chosen: Court Attendance Report and Analysis Word Count: 1314 Due date: 26th March 2012 Date submitted: 26th March 2012 Phone No*.: 0422733930 By submitting this assessment item you are agreeing to the following Declaration: I have read and understand Rule 3.18 concerning penalties which apply to Academic Misconduct Including Plagiarism, as contained in the University Handbook, and agree to be bound by the University rules in this regard. To the best of my knowledge the work I am submitting for this assessment item contains no materials written by another person except where due reference has been made. I have not previously submitted this work or any version of it for assessment in any other unit offered by Southern Cross University or any other institution. I declare I have kept a copy of this assignment. Date Time Court Judges/Magistrate Parties Legal Representation Yes/No Charges 23rd March 2012 10am Brisbane Supreme Court Justice Applegarth R -v- Sica Yes Murder and Grievous Bodily Harm 1. ...read more.

The Judge then told his associate to read out the charge to the court and ask the defendant on how he pleaded. At this time the defendant pleaded not-guilty to murder on the basis of provocation. Once this was said, the Judge then stressed out to the jury that the defendant is innocent until proven guilty and also advised them on what is to be expected as a jury. After this process, the Judge, Justice Applegarth asked the crown prosecutor to provide an opening address. The prosecutor opened his statement for the trial and informed the jury what kind of evidence he will be presenting in the upcoming days. The Judge then asked the defence lawyer if he was ready to give his opening statement. I found it quite easy to understand what was happening in the court room thanks to the Judge who was telling the jury how the court was going to handle the case in simple terms. When it came to the Judge using legal terms, it is said that this type of language is a key factor in creating court room confusion (Findlay, et al, 2009). However, this wasn't so much of an issue due to the Judge clarifying what he meant in simple terms to the court. ...read more.