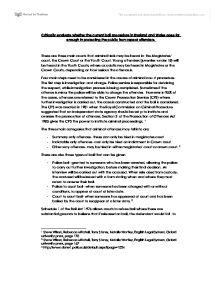 Bail procedure in England and Wales

Critically evaluate whether the current bail procedure in England and Wales goes far enough in protecting the public from repeat offenders.

Four main steps need to be considered in the course of criminal court procedure. The first step is investigation and charge. Police service is responsible for detaining the suspect, while investigation process is being completed. Sometimes if the offence is minor the police will be able to charge the offender. However in 95% of the cases, offences are referred to the Crown Prosecution Service (CPS) where further investigation is carried out, the case is constructed and the bail is considered. The CPS was created in 1981 when the Royal Commission on Criminal Procedure suggested that an independent state agency should be set p to institute and oversee the prosecution of offences. Section 3 of the Prosecution of Offences Act 1985 gives the CPS the power to institute criminal proceedings.[1]

The three main categories that criminal offences may fall into are:

There are also three types of bail that can be given:

Schedule 1 of the Bail Act 1976 allows courts to refuse bail where there are substantial grounds to believe that if released on bail, the defendant would fail to surrender to custody commits further offences, or interfere with prosecution witnesses or otherwise obstruct the course of justice.[4]

Section 3 of the 1976 Act suggests that a defendant may provide a surety, a person who agrees to forfeit a sum of money if the defendant fails to surrender.[5]

One way of reducing crime is through deterrence, which is concerned with preventing the commission of future crimes. However the Government’s 1990 White Paper highlighted that in most cases, deterrence is unrealistic. Reform and rehabilitation are preferred, as they do not aim to cause harm. The aim of rehabilitation is to change the actual thinking and belief of the offender, which will help prevent re-offending. Offenders have the chance to either see what they have caused to the victim and what the outcomes are, or they attend special classes and engage in different activities again aimed to avoid re-offending.

In 1974 Robert Martinson, American researcher held a debate, focused on rehabilitation programmed for prisoners, called ‘what works’. At the end of the debate, a conclusion was made that ‘nothing works’.[7]

Many academics argue that crime is actually a result of the way society is organised. It is also thought that the less advantaged in society, who are seen as in need of reform. Whereas when an offender comes from a more privileged background, their offence tends to be seen as one-off. This causes people to think that punishment is dictated not by the harm caused, but by the background of the offender.

A report of the parliamentary penal affairs, Changing Offending Behaviour Some Things Work (1999) found that there is increasing evidence that programmes focused directly on the needs of the offender in relation to the offending behaviour are successful in reducing the risk of re-offending.[9]

The right to bail has been reduced in recent years, mostly because individuals on bail in most cases reoffend or fail to turn up at court for their trial. The criminal justice statistics, 2003, shows that 14% of people, who were bailed to appear at court, have failed to do so. Nearly 25% of defendant’s commit at least one offence while on bail.[10]

Jack Straw also has a negative view over the bailing procedures in England. He said that ‘it was simply not good enough’. Every year about 40 000 offenders are released back into community. Most of them have no job, no home, no family and they are also left unsupervised. This is most cases leads to re-offending. Jack Straw also suggested a new way of practice, combining short jail term of less than 12 months with supervision in community. Offenders who fail to comply, could face extended periods in custody, and sentences will be followed by more rigorous post-release supervision.[11]