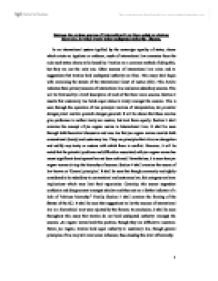 Between the various sources of International Law there exists an obvious hierarchy, in which treaty holds undisputed authority. Discuss.

Between the various sources of International Law there exists an obvious hierarchy, in which treaty holds undisputed authority. Discuss. In an international system typified by the sovereign equality of states, above which exists no legislator or enforcer, much of international law emanates from the rules such states choose to be bound by. Treaties are a common method of doing this, but they are not the only one. Other sources of international law exist, and to suggestions that treaties hold undisputed authority are false. This essay shall begin with examining the statute of the International Court of Justice (ICJ). This Article indicates three primary sources of international law and some subsidiary sources. This will be followed by a brief description of each of the three main sources. Section 2 asserts that customary law holds equal status to treaty amongst the sources. This is seen through the operation of two principle maxims of interpretation; lex posterior derogat priori and lex specialis derogat generali. It will be shown that these maxims give preference to neither treaty nor custom, but treat them equally. Section 3 shall examine the concept of jus cogens norms in International Law. It shall be seen through both theoretical discussion and case law that jus cogens norms override both conventional (treaty) and customary law. They are principles that allow no derogation and nullify any treaty or custom with which there is conflict. However, it will be noted that the potential problems and difficulties associated with jus cogens norms has meant significant development has not been achieved. Nevertheless, it is seen how jus cogens norms sit atop the hierarchy of sources. Section 4 shall examine the source of law known as 'General principles'. It shall be seen that though commonly and rightly considered to be subsidiary to conventional and customary law, this category can have implications which may limit their superiority. Certainly, this source engenders confusion and disagreement amongst scholars and thus acts as a further indicator of a lack of "obvious hierarchy." ...read more.

The Universal Declaration of Human Rights, adopted by the UN in 1948, includes such rights as the right to belong to a trade union,65 yet it is doubtful whether this provision would have a jus cogens character. In recent years, the prohibition on torture has become increasingly accepted as a jus cogens norm.66 The ICTY67 found in 1998 that "torture is prohibited by a peremptory norm of international law."68 Also definitely included as jus cogens norms are the prohibitions on slavery,69 piracy,70 as well as genocide, as was seen in the Reservations to the Genocide Convention.71 The ICJ proclaimed in the East Timor Case72 that the right of peoples to self determination "has an erga omnes character."73 However, it is easy to see how these norms rely on much interpretation and thus a clearer definition of jus cogens norms remains difficult.74 Though there is substantial agreement on the existence of the jus cogens category of norms, the content of this category remains a matter of huge debate. The existence of jus cogens norms, even though there may be confusion as to what norms have this status, act as a limit on states regarding their freedom to conclude treaties. If treaties are limited in this way and subject to acting in accordance with jus cogens, then they cannot be said to hold "undisputed authority." In fact, it is the jus cogens category that tops the hierarchy. 4. The General Principles of Law Article 38(1)(c) refers to "general principles of law recognised by civilised nations." Though generally considered to be subsidiary to treaty and customary law,75 this clause can impact on the formulation of treaties and customary rules and certainly questions the existence of an obvious hierarchy. Some writers, particularly those of what was known as the Soviet school, such as Tunkin,76 argue that this provision does not refer to sources of international law at all,77 but to "non-normative" methods for determining law,78 referring to those maxims discussed above.79 Similar views are found in the writing ...read more.