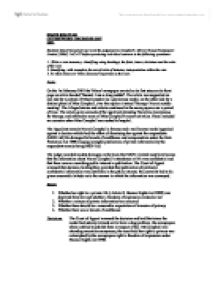 Students should download and read the judgments in Campbell v Mirror Group Newspapers Limited [2004] 2 AC 457 before producing individual answers to the following questions:-

1.  Write a case summary, identifying using headings, the facts, issues, decisions and the ratio of the case

2. Identifying, with examples, the use of rules of statutory interpretation within the case

3. To what extent are 'Policy Reasons' important in this case.

On the 1st February 2001 the 'Mirror' newspaper carried as its first story on its front page an article headed 'Naomi: I am a drug addict'. The article was supported on one side by a picture of Miss Campbell as a glamorous model, on the other side by a  distinct photo of Miss Campbell, over the caption it stated 'Therapy: Naomi outside meeting'. The Alleged stories and articles continued in the news papers over a period of time. The article gave accounts of the appellant attending Narcotics Anonymous for therapy, and referred to some of Miss Campbell's recent activities. These included an occasion when Miss Campbell was rushed to hospital.

The Appellant namely Naomi Campbell a famous and a well known model appealed against a decision which had the effect of dismissing her against the respondents (MGN Ltd) for damages for breach of confidence and compensation under the Data Protection Act 1998 alleging wrongful publication of private information by the respondent namely being MGN Ltd.

The judge awarded modest damages on the basis that MGN Limited must have known that the information about Naomi Campbell’s attendance at NA was confidential and that there was no overriding public interest in publication. The Court of Appeal reversed that decision, holding that, provided that publication of particular confidential information was justifiable in the public interest, the journalist had to be given reasonable latitude as to the manner in which the information was conveyed.

Decisions:        The Court of Appeal reversed the decision and held that since the model had untruly claimed not to have a drug problem, the newspapers where entitled to publish facts in respect of her. Ms Campbell was attending narcotics anonymous; the court held her right to privacy was outweighed by the newspapers right to freedom of expression under Human Rights Act 1998.

Reasons for the Decision

"Part of the price we pay for living in an organised society is that we are exposed to observation in a variety of ways by other people."

Here the court decided that there was nothing amounting to an invasion of privacy, the court applied a test and took into account (a) whether and to what extent the person photographed had reasonable expectation of privacy in relation to their subject matter and, (b) whether the photographs were taken secretly. Section 12(4) of the 1998 Act shows that a person may have reasonably expectation of privacy in a public place.  The claimant being a well known person had to expect her actions would be monitored and analysed by the media.

“…whether or not that information was supplemented by a Mirror reporter attending narcotics anonymous or by covert photography. The information clearly bore the badge of the confidentiality and when  received by the defendants they, Mr Morgan and the Mirror journalists were clothed in conscience with the duty of confidentiality.”

Here we can see that the Judge clearly makes out that a duty was owed by the journalists towards Naomi Campbell and this was evidently breached by the publishing of photos together with the articles. To see whether a breach of confidence existed the case was viewed objectively and the judge stated that this would cause considerable distress and details being published was to her detriment and would effect adversely her attendance and participation in therapy meetings. A Judge

Judgment was awarded to the claimant of £3500.00 for damages and an injunction in her action against the defendants for breach of confidence and breach of duty.

The Court of Appeal here are establishing what overweighs in the public interest is by balancing the competing interests such as Article 8 Right to Privacy and Article 10 Right to Freedom of Speech under the Human Right Act 1998.

The Court having having established that the publication of the articles as a whole, including the defamatory material, shows this is in the public interest, the court then undertakes an analysis of whether the publication was responsible and fair.

The duty not to misuse information will be imposed whenever "a person receives information he knows or ought to know is fairly and reasonably to be regarded as confidential" (Campbell, per Lord Nicholls, para. 14). The notion of ‘private information’ has been given a broad interpretation. Here clearly it has been given the purposive rule to fit its purpose.

The courts, to fulfil the requirement to interpret and develop the common law in accordance with the European Convention of Human Rights (ECHR), have extended the protections provided by the tort of breach of confidence. The nature of the tort has changed to the extent that Lord Nicholls in Campbell v MGN Ltd. [2004] UKHL 22, [2004] 2 AC 457, para 21, said

"The essence of the tort is better encapsulated now as misuse of private information".

A frequent difficulty is how to balance the claimant’s interest in protection of private information under Article 8 ECHR, which allows for restrictions to protect the rights of others including freedom of expression rights, and the defendant’s interest in freedom of expression under Article 10 ECHR. The competing interests are subject to a proportionality test that requires all relevant elements of the specific claims to be balanced.

It has always been accepted that information about a person's health and treatment for ill-health is both private and confidential. This stems not only from the confidentiality of the doctor-patient relationship but from the nature of the information itself. As the European Court of Human Rights put it in Z v Finland (1997) 25 EHRR 371, 405, para 95:

“It is crucial not only to respect the sense of privacy of a patient but also to preserve his or her confidence in the medical profession and in the health services in general. Without such protection, those in need of medical assistance may be deterred from revealing such information of a personal and intimate nature as may be necessary in order to receive appropriate treatment and, even, from seeking such assistance, thereby endangering their own health and, in the case of transmissible diseases, that of the community.”

The Court of Appeal in the above case held that the information revealed in Campbell v MGN Limited was not in the same category as clinical medical records, the court of appeal here changed what it literally applied to it can be translated that the golden rule

was used here and not the Eisedum Generis (of the same kind).

Section 12(4) of the Human Rights Act 1998 now warns judges to have a “particular regard” to the convention’s right to freedom of expression. Therefore implying that the parliament is pushing the courts towards greater freedom of expression and balancing articles 8 and 10 of the Convention for the Protection of Human Rights and Fundamental Freedoms scheduled thereto, the publication was not justified in the public interest. The Court of Appeal allowed the newspaper's appeal and held that the disclosure of information that the claimant was receiving therapy from a self-help group and not details of any medical treatment. Here the you can see that the Judge has used the literal rule interpreting the literal meaning of freedom of expression.