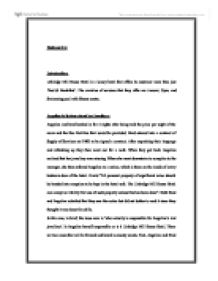 Business law Introduction; Uxbridge Mill House Hotel is a luxury hotel that offers its customer more than just 'Bed & Breakfast'. The varieties of services that they offer are Jacuzzi, Gym, and Swimming pool with fitness centre. Angelina is furious about her jewellery; Angelina and brad booked in for 2 nights after being told the price per night of the room and the free facilities that would be provided. Brad entered into a contract of Supply of Services act 1982 as he signed a contract. After unpacking their language and refreshing up they then went out for a walk. When they got back Angelina realized that her jewellery was missing. When she went downstairs to complain to the manager, she then referred Angelina to a notice, which is there on the inside of every bedroom door of the hotel. It said "All personal property of significant value should be handed into reception to be kept in the hotel safe. The Uxbridge Mill House Hotel can accept no liability for loss of such property unless this has been done". Both Brad and Angelina admitted that they saw the notice but did not bother to read it since they thought it was about fire drills. In this case, in brief, the issue now is 'who actually is responsible for Angelina's lost jewellery'. Is Angelina herself responsible or is it Uxbridge Mill House Hotel. There are two cases that will be formed and heard in county courts. First, Angelina and Brad would ask for compensation from UMHH and the second UMHH will defend its stance. According to (Olley v Marlborough Court Hotel, 1949), this case suggests that anything that happens after the contract papers are signed is not a part of the contract. The representation can only be binding where it was made at the time contract was formed. It was Angelina and Brad's first visit to the hotel, the hotel should have informed them about the notice prior to the contract. ...read more.

When the incident happened, it had already been two months more than the warranty period. So certainly neither Mill House fitness centre nor Pracash can accuse Pro-fit under any circumstance. Now, the issue remains that whether it is a fault of the Uxbridge Mill House fitness centre or was it negligence on Pracash's side as well as whether Pracash is eligible for the compensation for his back injury. It is clearly visible in the case given that Pracash's injury was caused because of the faulty equipment, so Pracash is likely to sue Uxbridge Mill House fitness centre, under 'Duty of Care' that they did not carry out their services with reasonable care or he can sue Mr. Dean, the duty manager, under tort as he is acting in the course of his employment duties and not on a frolic on his own. To behave negligently is to be careless which means the damages caused by negligent conduct is generally actionable irrespective of the kind of activity out of which the damage arose. In order to win the case in tort Pracash must prove fault. According to the law of tort subsection the tort of negligence is said to consist of three essential elements. Firstly, a 'duty of care' that Uxbridge Mill House fitness centre failed to comply by leaving them unattended. Secondly, a 'breach of that duty' by not extending the warranty of their equipment and lastly, the damage to the plaintiff caused by that breach of duty which in this case, the plaintiff, Pracash suffered back injury. In light of a past case of 'Davis Contracters v Fareham UDC 1976 where the Lord Redcliffe gave judgement that a reasonable duty of care is must. As well as there was a breach under 'Health and Safety Act of 1974' that says 'all the businesses are supposed to take safety minimum precautions'. Another issue which arises is that the application form stated right at the bottom in small print, "Whilst the equipment is maintained to ...read more.