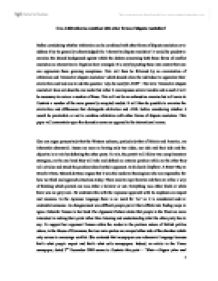 Can Arbitration be combined with other forms of dispute resolution?

Can Arbitration be combined with other forms of dispute resolution? Before considering whether arbitration can be combined with other forms of dispute resolution or to address it by its generally acknowledged title 'alternative dispute resolution' it would be prudent to examine the shared background against which the debate concerning both these forms of conflict resolution as alternatives to litigation have emerged. It is only by putting these into context that one can appreciate there growing acceptance. This will then be followed by an examination of arbitration and 'alternative dispute resolution' which should allow the individual to appreciate their similarities and lead one to ask the question 'why the need for ADR?'. The term 'alternative dispute resolution' does not describe one model but rather it encompasses several models and as such it will be necessary to review a number of these. This will not be an exhaustive exercise but will serve to illustrate a number of the more generally accepted models. It will then be possible to examine the similarities and differences that distinguish arbitration and ADR. before considering whether it would be practicable or not to combine arbitration with other forms of dispute resolution. This paper will concentrate upon the domestic arenas as opposed to the international arenas. One can argue persuasively that the Western cultures, particularly that of Britain and America, are inherently adversarial. Issues are seen as having only two sides, our side and their side and the objective is to win by defeating the other party. To win, the party's will follow two complimentary strategies; on the one hand they will take and defend an extreme position while on the other they will criticise and attack the position taken by their opponent. In his book Conflicts: A Better Way to Resolve Them, Edward de Bono argues that it was the medieval theologians who are responsible for how we think and approach situations today. ...read more.

and the International Dispute Resolution Centre which offer a range of mediation and conciliation services. The advantages of resolving disputes at the origin or close to the origin of the dispute were recognised in the Latham Report (July 1994) entitled 'Constructing The Team' which addressed procurement and contractual arrangements in the U.K. construction industry. Latham, contends that the construction industry has become extremely adversarial which is driving down efficiency and to combat this he has called for a multi-tiered approach to dispute resolution, which includes ADR and arbitration. Latham argues that early identification and resolution of a dispute would not only reduce litigation costs but also increase the chances of the parties developing a co-operative (rather than competitive) attitude towards each other which would serve to drive up productivity. His recommendations were taken up and incorporated into the New Engineering Contract (1993) before the final report was published. It is interesting to note that he does not disregard arbitration in favour of ADR but sees the latter as complimenting the former. The ability to resolve disputes at the origin or close to the origin of the dispute as possible without recourse to the courts would appear to be one of the major driving forces behind its rapid incorporation in the legal and particularly the commercial fields. As stated earlier the term 'alternative dispute resolution' encompasses a variety of models. It would therefore seem appropriate to examine a number of these models and then compare them to arbitration as a method of dispute resolution. However, before we consider these models it would be appropriate to explain why in my opinion 'negotiation' should not be considered as part of the ADR process (despite Lord Woolf's opinion that it is). When a dispute arises the parties will invariable try to resolve that dispute by themselves. The parties will only seek ADR, arbitration or litigation on the collapse of the negotiations. ...read more.

Indeed, the courts will sist proceedings where an agreement to arbitrate is found to exist. Rather than 'Alternative Dispute Resolution' usurping arbitral proceedings its inclusion in the process of dispute resolution actually enhances it. ADR gives effect to a tiered approach to dispute resolution. At the lower levels is ADR which facilitates disputes being resolved as close to the origin of the problem as possible. This can prove not only cost effective and quick but will be conducted in a co-operative as opposed to an adversarial environment. By virtue of the process, cases coming before for example, mediation will not be too complex. Arbitration is the next tier, followed by litigation. Arbitration, despite being costly and time consuming in comparison to ADR has additional benefits that a potential party might want to avail themselves off. The fact that they can choose the law governing the arbitration, the arbiter, the rules relating to the process and arbitrate in the confidence that the arbitration is conducted in an open forum (what the arbiter hears or receives from one party must be made available to the other party) while allowing the presentation of documents and the attendance of witnesses will encourage those whose cases are of a more complex nature to adopt arbitration as opposed to ADR. Thus, the nature of the dispute will determine which tier of the dispute resolution process will be chosen (though in England Lord Woolf's reforms are having an impact on individual choice). While arbitration and 'alternative dispute resolution' can be described as different forms of dispute resolution they are separate and identifiable tiers with in this generic category and as such cannot and should not be combined or merged. Appendix A. The table below uses the Scottish Arbitration Code 1999 and the Centre for Effective Dispute Resolution (CEDR) Code of Conduct, Rules for Adjudication and Model Mediation Procedure and Agreement were used. For simplicity, the table applies the Scottish Arbitration Code 1999 headings. ...read more.