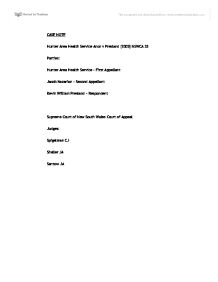 The facts of this case are concerning a negligence action by a mentally ill patient who received treatment at John Hunter Hospital (JHH), after he was taken there by police after behaving in a violent and bizarre manner.  He was later transferred to James Fletcher Hospital (JFH) as he was considered a danger to himself and others due to his bizarre and psychotic state.  After a brief assessment by Dr Nazarian, he was released from hospital.  The plaintiff then some 6 hours later, on 4 July 1995, took the life of an innocent person (his brothers’ fiancé Kelly Ann Laws). The plaintiff was tried for murder but entered special verdict of not guilty on the grounds of mental illness and was detained in a psychiatric hospital as a forensic patient until his release pursuant of the Mental Health (Criminal Procedure) Act 1990[1].

The issue here is should the respondent receive a financial benefit due to duty of care owed to him. Adams J the trial judge originally awarded damages of $225,000 general damages and $113,300 for economic loss.

This case began in Supreme Court.

The appellants believe the financial benefit the plaintiff received was excessive.

Spigelman CJ, Sheller and Santow JJA agree that Dr Nazarian failed to correctly assess and detain the plaintiff as per the Mental Health Act 1990 (NSW) (MHA). The MHA[2] specifies in s4 the objects of the Act in relation to the care, treatment and control of mentally ill and mentally disordered persons are to provide for and facilitate the care, treatment and control of those persons through community care facilities and hospital facilities. This section is a key element in this appeal.

Section 10 of MHA[3] provides ‘A person (whether or not is suffering from mental illness) is a mentally disordered person if the … behavior … is so irrational as to justify a conclusion on reasonable grounds that temporary care, treatment or control of the person is necessary

for the person’s own protection from serious physical harm; or

As per s17 of the Act[4], it specifies that a medical superintendent may refuse to admit a person to hospital if they are not satisfied that they would benefit from care or treatment.

Both Hunter and Dr Nazarian accepted that they did owe the plaintiff a general duty of care.  This acknowledgment confirms that they could not argue that there was the risk of injury of the kind which occurred.

When making his decision, Sheller JA when illustrating the maxim ex turpi causa non oritur action cited the following cases: Kirkham v Chief Constable of Manchester[5]  (where the police were held negligent as the husband of the plaintiff was a suicide risk and owed a duty of care), Meah v McCreamer (No 2)[6] where Shellar JA disagrees with Woolf J’s decision and in his opinion if someone is found guilty of a crime then the law has found that he is responsible for his actions.  As the plaintiff had not intended to kill Ms Laws, the chain of causation had not been broken. By the defendants releasing the plaintiff he was in an environment where he could

harm others . A similar case is that of Clunis v Camden & Islington Health Authority[7], the difference is that in this case the plaintiff was found guilty of  murder and as such could not claim damages as per the maxim ex turpi causa non oritur action due to the court refusing to lend its aid to one who founds his cause of action on an illegal act. Sheller JA found that although the plaintiff was acquitted and held not criminally responsible for the murder, and was detained in custody in a psychiatric hospital.  It is due to this that the plaintiff is claiming damages for the consequence of the detention, as well as the failure of the defendants to detain him and the unlawful killing of Ms Laws.

Santow JA stated that what makes this case so unusual is that the action was not brought by the victim or the victims relatives. He also added the respondent undoubtedly suffered non-physical harm of a serious nature due to the hospital’s failure to compulsory detain him.  It was due to this that the hospital and psychiatrist may be liable for the loss of liberty lawfully suffered by a forensic patient, following his killing of another while insane, itself an unlawful act but without criminal consequence.  Santow JA recognizes that the common law’s reluctance to impose a duty of care on the harm-causing person, even where it was reasonably foreseeable that harm of that kind was reasonably foreseeable.

Santow JA points out that he bases his conclusion on what he conceives to be legal policy, which is ultimately based on community values. He endeavours to answer the question ‘What is the purpose and scope of the (common law) rule said to render the appellants liable, one is taken back to legal policy’, which was posed by Lord Hoffman.[8] The response being that causal uncertainty as to what would have happened if the duty of care had been performed is a compelling reason for caution in extending the duty of care. Due to Dr Nazarian’s negligence, he was unable to properly diagnose the plaintiffs’ mental illness and as such did not use his power to detain him. It is due to this that the defendants should not argue that they should not have foreseen the risk of injury which did occur.

Santow JA discusses how under the Act[9] the civil rights of the individual need to be accommodated and balanced against the need for restraint. Santow JA’s application of principles differ to that of Spigelman CJ’s in respect to weighting of relevant factors when applied to determine the extent of any legal responsibility and in particular the proper scope of the duty of care in this context and on causation. Spigelman CJ found for the plaintiff regarding duty of care and Santow JA did not. Santow JA maintains that in answering the question as to whether factors are sufficient to

justify a duty of care extending to non-physical injuries, the claimed duty of care is directed primarily to compensating the respondent for the 18 months deprivation of liberty he suffered as a forensic patient, mental anguish suffered as a result of the killing of Ms Laws as well as being separated from his family. A question posed was the principle bearing upon the reasonableness of the imposition of a duty and whether the injuries suffered are properly attributable to the appealants’ failure to compulsorily detain the plaintiff, as to causation responsibility or the scope of liability for consequences. Santow JA points out that the purpose of sections 9 and 10 of the MHA[10]show that the Act is concerned with preventing serious harm to the plaintiff or others but not non-physical consequences of such conduct.

Santow JA does not consider that the statute by itself compels either the hospital or medical practitioner to admit, or compulsorily detain. Had sections 4(1)(c) and (d) been followed then facilitation of hospital care and protection of the civil rights of mentally ill or mentally disabled would have occurred.

Santow JA stated that the evidence shows that the plaintiff was badly treated as a forensic patient and as such the verdict and judgment in favour of the plaintiff must be set aside. Damages payable are for not

compulsorily detaining the plaintiff before murdered Ms Laws and not for the time he spent as a forensic patient at Long Bay Gaol.

With regards to damages, per Sheller JA (Spigelman CJ and Santow JA) all agree that the general damages awarded was so high as to fall outside that range of what could reasonably be regarded as appropriate (Triggell v Pheeney[11]). They agree a more appropriate general damage amount of $100,000 should be applied.  This amount is made up of 75 per cent for past damages and 25 per cent for the future. The orders were that the appeal was allowed; set aside the verdict and judgment for the plaintiff; in lieu thereof verdict and judgment for the defendants; the plaintiff to pay defendants’ costs of the trial and of the appeal but to have a certificate under the Suitors’Fund Act 1951, if so entitled.