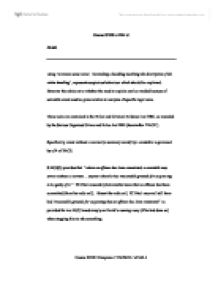 Course W100: eTMA 4: David. Using 'common sense rules', 'concealing a handbag matching the description of the stolen handbag', represents suspicious behaviour which should be explained. However the advice as to whether the need to explain can be avoided because of unlawful arrest must be given relative to analysis of specific legal rules. Those rules are contained in the Police and Criminal Evidence Act 1984, as amended by the Serious Organised Crime and Police Act 2005 (hereinafter 'PACE'). Specifically, arrest without a warrant (a summary arrest) by a constable is governed by s.24 of PACE. S.24(3)(b) provides that "where an offence has been committed, a constable may arrest without a warrant ... anyone whom he has reasonable grounds for suspecting to be guilty of it." PC Patel reasonably believed he knew that an offence had been committed (from his radio call). Absent the radio call, PC Patel may well still have had 'reasonable grounds for suspecting that an offence has been committed' as provided for in s.24(2) based simply on David's running away (if he had done so) when stopping him to ask something. As David was wearing the same type of jacket as the person suspected of stealing the handbag, in tandem with his decision to run away rather than cooperate, PC Patel fairly unequivocally had 'reasonable grounds for suspecting' David. ...read more.

Because this construction uses known facts rather than conjecture I find it more persuasive on balance. In conclusion, my advice is that Esther may be able to demonstrate her arrest was unlawful. I would wish however to add the warning that she risks the appearance of seeking to avoid justice by using a technicality. Many of the facts conspire against achieving favourable interpretive discretion, making the outcome uncertain. Fred. In drafting this advice as to whether the Crown Prosecution Service (CPS) has made the wrong decision in deciding to prosecute Fred I have considered the Code for Crown Prosecutors, November 2004 (fifth edition) (the 'code'). The charge is the gravest non-fatal charge possible. Section 5.9 of the Code provides that 'the more serious the offence, the more likely it is that a prosecution will be needed in the public interest.' Analysis of the facts available would therefore have to yield substantive and highly persuasive arguments to reverse the CPS's stance. The CPS will have had to apply 'the full code test', comprising the 'evidential' and 'public interest' stages. Relative to the evidential stage, s.5.2 requires 'a realistic prospect of conviction', defined at s.5.3 as 'more likely than not' that Fred will be convicted of the charge alleged. ...read more.

Since the alleged offence is minor, there is a good argument that the public interest is not served by prosecuting Ann, for example on grounds of cost and court time relative to the 'value of justice' being done. Why hasn't the CPS proposed the various alternatives to prosecution as required by s.8.1? In any case, there are sufficient arguments available to Ann to press to simply drop the matter. There is scant evidence that any substantive factors in favour of prosecution (s.5.9) apply. (If necessary, Ann can plausibly argue that she was unaware of the proximity of children relative to s.5.9.j). Turning to 'common public interest factors against prosecution', those that seem directly applicable are that the 'court is likely to impose a nominal penalty', and 'the ... harm can be described as minor and was the result of a single incident, particularly if it was caused by a misjudgement.' (s. 5.10.a and d). Further, the CPS must reconsider their decision following Ann's neighbour's letter asking for the case to be dropped since s.5.12 compels 'Crown Prosecutors [to] ... always take into account ... any views expressed by the victim.' In short, prosecuting a retired police officer is most unlikely to 'have a significant positive impact on maintaining community confidence.' (s.5.9.q) and I would advise Ann to contest the CPS's decision. ...read more.