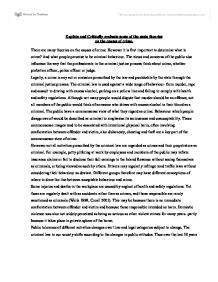 Explain and Critically evaluate some of the main theories on the causes of crime. There are many theories on the causes of crime. However it is first important to determine what is crime? And what people perceive to be criminal behaviour. The views and concerns of the public also influence the way that the professionals in the criminal justice process think about crime, whether probation officer, police officer or judge. Legally, a crime is any act or omission proscribed by the law and punishable by the state through the criminal justice process. The criminal law is used against a wide range of behaviour- from murder, rape and assault to driving with excess alcohol, parking on a yellow line and failing to comply with health and safety regulations. Although not many people would dispute that murder should be an offence, not all members of the public would think of someone who drives with excess alcohol in their blood as a criminal. The public have a commonsense view of what they regard as crime. Behaviour which people disapprove of would be described as criminal to emphasise its seriousness and unacceptability. These commonsense images tend to be associated with intentional physical harm, often involving confrontation between offender and victim, also dishonesty, cheating and theft are a key part of the commonsense view of crime. However not all activities proscribed by the criminal law are regarded as crimes and their perpetrators as criminal. For example, petty pilfering at work by employees and members of the public may inflate insurance claims or fail to disclose their full earnings to the Inland Revenue without seeing themselves as criminals, or being viewed as such by others. Drivers may regularly infringe road traffic laws without considering their behaviour as deviant. Different groups therefore may have different conceptions of where to draw the line between acceptable behaviour and crime. Some injuries and deaths in the workplace are caused by neglect of health and safety regulations. ...read more.

Becker (1963) says that deviance is a normal part of adolescent life. Such behaviour is labelled deviant and the adolescent then sees himself as a 'deviant', which encourages him to continue his deviant behaviour into adulthood. The initial deviance might be some minor theft (primary deviance) and this through labelling turns into more serious crime (secondary deviance). Secondary deviance is when the adolescent accepts the label and follows the deviant lifestyle (lemart, 1972). Criticisms of this theory are that it cannot explain all criminal behaviour but might help to explain crime amongst the lower economic social groups. However labelling might also encourage individuals to become good and prove the label they are given wrong. There are also constitutional theories on the causes of crime. Cesare Lombroso studied the physical characteristics of convicts in prisons in the late nineteenth Century. He claimed that criminal men were distinguished by what he called 'physical stigmata', which included long arms, shifty glances, droopy eyelids, bushy eyebrows, large ears, twisted noses and abnormal mouths and skulls (Lombroso 1897). His theories were later discredited, as many similar characteristics were found in the general population, but they stimulated further research relating criminality to physical and genetic characteristics. A variety of factors were related to crime, such as body shapes. William Sheldon believed that people could be classified into three body shapes, which correspond with three different personality types. - endomorphic, who tend to be sociable and relaxed - ectomorphic, who are introverted and restrained - mesomorphic, who tend to be aggressive and adventurous In 1939 Thornton showed 20 photographs of criminals to people who were asked to choose one of four crimes each of the criminals might have committed. He found that people could match faces to crimes more reliably than would have been predicted by chance. There was also further research carried out giving genetic explanations of the causes of crime. ...read more.

This organization has been responsible for a large number of crime prevention projects in conjunction with both commercial and public organisations. The Crack Crime campaign was also launched in 1988. In 1993 a National Board for Crime Prevention was established to bring together representatives of central and local government, business, voluntary agencies, the media, the police and the probation service. A major development was Safer Cities programme, launched in 1988. their goal were to reduce crime, lessen fear of crime and to create safer cities where economic enterprise and community life can flourish. Situational crime prevention, involves altering the situational or spatial characteristics either to make offending more difficult or detection easier (Crawford 1998). What is sometimes described as 'opportunity reaction' can take three forms: - increasing the effort involved in crime, e.g. speed humps and physical protection to targets such as locks and bolts. - Increasing the risks of detection, which involves increasing surveillance, e.g. redesigning buildings, installing CCTV cameras. - Reducing the rewards of crime, e.g. traceable property, replacing coin operated meters with those which require a swipe card (Crawford 1998) The introduction of steering locks has been found to reduce car theft, and also improved street lighting. Social crime prevention is based more on the social factors associated with crime such as living conditions, relative deprivation and social disorganisation. Young people are often the targets of social crime prevention as they feature to prominently among offenders and there has always been a general belief that the pursuit of a criminal career can be prevented by 'nipping it in the bud'. Early intervention involves a range of schemes including, for example, supporting 'good' parenting by working with families and improving parental supervision, targeting schools by focusing on school discipline, tackling truancy. A large number of schools now attempt to tackle 'bullying', often seen to be associated with youth crime. Professionals, lay groups, and the community at large, as well as central government and local authorities, have a responsibility for responding to crime and seeking to prevent it. ...read more.