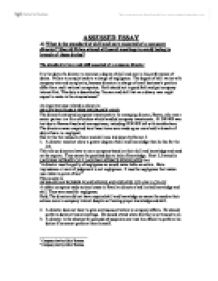 ASSESSED ESSAY A) What is the standard of skill and care expected of a company director? Should Brian attend all board meetings to avoid being in breach of these duties? The standard of care and skill expected of a company director It is the duty of a director to exercise a degree of skill and care in his performance of duties. Failure to comply leads to a charge of negligence. The degree of skill varies with company size and complexity, because directors in charge of small business's position differ from multi-national companies. Both should act in good faith and put company interest first. This duty is described as 'the care and skill that an ordinary man might expect to make in the circumstances'1 An important case related is shown in: RE CITY EQUITABLE FIRE INSURANCE (1925) The directors entrusted company investments to its managing director, Bevan, who was a senior partner in a firm of brokers which handled company investments. �1 200 000 was lost due to Bevans fraud and incompetence, including �350 000 left with stockbrokers. The directors never enquired how these items were made up so were held in breach of duty of care i.e. negligent. Due to this the measure of care and skill was laid down by Romer J: 1. A director need not show a greater degree of skill and knowledge than he has for the job. This tells us directors have to run a company based on their skill and knowledge and need not be experts. ...read more.

THE CORPORATE OPPORTUNITY DOCTRINE This rule states no director must secretly profit from a company personally from corporate information or opportunity that comes their way in office. They must use all opportunities for company benefit and if used for personal benefit to make secret profits they must render the profit accounts to the company as are in breach of fiduciary duty. A director must not misuse this information as seen in REGAL HASTINGS LTD V GULLIVER (1942) ALL ER.378 A company which owned a cinema in Hastings wanted to buy two more to sell three together. It formed a subsidiary company to purchase them but could only come up with �2000 out of �5000. The directors bought shares in the subsidiary company to obtain necessary capital. They bought the two cinemas and Regal ltd shares and sold the subsidiary for a large profit. Held: The directors must account to Regal company for the profit they made as only through knowledge and opportunity gained as directors they obtained the shares, so are in breach of duty. A director who obtains a contract whilst employed must render profits to company even if it was unlikely to gain it as shown in: INDUSTRIAL DEVELOPMENT CONSULTANTS LTD V COOLEY (1972) 1 WLR 443 In this case IDC ltd provided construction consultancy services for gas boards. Its managing director was Cooley. Cooley was informed that it was unlikely IDC would get the contract. ...read more.

Held: The plaintiff made it clear to everyone about his interest in his contract so there was no need of declaration. Section 317 points out 'no disclosure to sub-committee needed'8 as seen: GUINESS PLC V SAUNDERS A committee of Guiness plc agreed to pay Saunders, �5.2 million in connection with a takeover bid made by Guiness. Held: As payment not approved by the board of directors, Saunders not entitled to retain payment. Conflict of interest can occur with one director. NEPTUNE (VEHICLE WASHING EQUIPMENT) LTD V FITZGERALD (1966) The director failed to act in company interest when he never informed other directors of the facts concerning development of land owned by the company which he then purchased before selling it at profit. Where a company has only one director, it has been held that interest in a meeting is recorded even if attended alone. ADVISE TO BRIAN ON CONFLICT OF INTEREST Brian if you think conflict of interest will occur between your car business and Gotham Motors Ltd, avoid this as it conflicts against your duty as a director. It is allowable for you to take shares in Gotham ltd but one factor you have to take into account to avoid conflict of interest is that you have to tell the board of directors that you are a sole trader dealing with cars. Failure to disclose will lead to a fine and assumption of conflict of interest as he has gone against Sec 317. If you disclose to directors informally, no declaration at a meeting is needed. . ...read more.