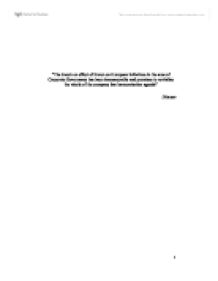 66 Op cit, n 10, at p 91 "Despite the differences in corporate governance systems, there seems to exist a trend towards convergence. This convergence is not only occurring in developed economies, which are adopting corporate governance mechanisms as they develop their institutions, as well as in developing economies, which face pressure form international donors for more transparent governance systems. This trend toward convergence does not imply a movement towards a single model of corporate governance, but a transition towards common guiding principles of information, transparency and accountability. Variation in national contexts, especially in terms of legislation, institutions, the development of capital markets, concentration of ownership and separation of ownership and control, will sustain differences in corporate governance and control systems." 67 ECOFIN Oviedo 2002 "Enron's collapse has increased awareness that proper Corporate Governance is essential to the efficient functioning of capital markets and high quality financial reporting." 68 Company Law Action Plan 2003 "There is little indication that the development of a European corporate governance code as an additional layer between principles developed at the international level and codes adopted at national level would offer significant added value." 69 Hill and Jones 2002 "Groups of constituents who have a legitimate claim on the firm, based on an exchange relationship and which includes stockholders, creditors, managers, employees, customers, suppliers, local communities and the general public" 70 Dorey 2000 "Codification has been a rather toothless exercise, and that the shareholder is still dependent on Trust, that the Directors have given a fair and true value in their communication and reports" 71 www.mori.com Article: The Business World Will Never Be The Same: The Contribution Of Research To Corporate Governance Post-Enron, 16th December 2003 Higgs commented in his interview with MORI that "You can't absolutely prevent something like Enron or WorldCom happening if the people in that company are determined to do that" 72 Changes in the USA have so far included the introduction of the Sarbanes-Oxley Act and the accounting regulator, the Public Company Accounting Oversight Board. Company boards have increased the number of independent directors and audit committees are more carefully monitoring auditors 1 ...read more.