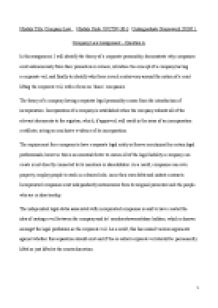 Company Law Assignment. I will identify the theory of a corporate personality, demonstrate why companies exist autonomously from their promoters or owners, introduce the concept of a company having a corporate veil, and finally to identify why there is s

﻿Module Title: Company Law Module Code: UJUTN7-30-3 Undergraduate Coursework 2010/11 Company Law Assignment ? Question A In this assignment, I will identify the theory of a corporate personality, demonstrate why companies exist autonomously from their promoters or owners, introduce the concept of a company having a corporate veil, and finally to identify why there is such controversy around the notion of a court lifting the corporate veil, with a focus on ?sham? companies. The theory of a company having a separate legal personality comes from the introduction of incorporation. Incorporation of a company is established when the company submits all of the relevant documents to the registrar, which, if approved; will result in the issue of an incorporation certificate, acting as conclusive evidence of its incorporation. The requirement for a company to have a separate legal entity is forever scrutinized by certain legal professionals, however this is an essential factor to ensure all of the legal liability a company can create is not directly connected to its members or shareholders. As a result, companies can own property, employ people to work in a desired role, incur their own debts and initiate contracts. Incorporated companies exist independently autonomous from its original promoters and the people who are in directorship. The independent legal status associated with incorporated companies is said to have created the idea of casting a veil between the company and its? members/owners/share holders, which is known amongst the legal profession as the corporate veil. As a result, this has caused various arguments against whether this separation should exist and if the so called corporate veil should be permanently lifted or just lifted at the courts discretion. ...read more.

When Mr Jones attempted to complete this contractual agreement, Mr Lipman changed his mind and devised a plan to negate his pre-contractual obligation to sell the property. As a result, the property was conveyed to an incorporated company that he had created and formed simply for the purpose to prevent the specific performance order within his contracted obligation with Mr Jones. This case was held in the High Court, with Russell, J, who decided that the defendant had created the company specifically for the purpose of avoiding his pre-contractual obligation with Mr Jones. He stated that the company was a mere ?cloak or sham?[7] to avoid the specific performance which he had previously contracted and agreed to do. The facts of the case clearly showed a piercing of the veil and illustrated how if a company is created as a device to conceal facts and avoid pre-contractual obligations, the strict application of the Salomon principle should be ?pierced? or ?lifted?. However, in this case Russell, J. did not achieve this justification, as he refused to recognise the existence of the corporate veil and instead made an order for specific performance against the defendant and the company he had created. The Lipman v Jones case was one of the first examples of a company being created as a clear ?facade?. Even though, the judge did not use the legal terms of lifting the corporate veil the idea of it was still present throughout, and it wasn?t until a later case that clear principles were created to justify lifting or piercing of the veil. This came in the leading judgement of Lord Justice Slade, in Adams[8]. The facts of this case were of high complexity. ...read more.

In addition, there are other interpretations of lifting the veil; known as extending the veil, as seen in DHN Food Distributors Ltd[14] where the veil is lifted with the purpose of drawing it back over a larger amount of companies, and a minor form known as peeping behind the veil seen in the case Atlas Maritime[15], where the veil is lifted to simply retrieve information on who directs or controls the company. Both interpretations are valid within the English courts, however still have limited applicability and are rarely used and discussed[16]. To conclude, the indications within the English legal system is that courts, at their own discretion can decide to lift or pierce the corporate veil, depending on the basis that the facts of the case coincide with previous case law, (with a requirement to identify the true nature of a company) and identifies that a company is created as a sham or an agent, to enable illegal activities being continued under limited liability. Journal articles and various legal practitioner articles identify that courts have the power to distinguish and interpret the law to their own interpretation through the use of the so called lifting of the ?Corporate veil?, which has many discrepancies. However, it is evident that without these exceptions where the veil can be lifted, it would allow opportunists to take advantage of incorporated companies, having a separate legal entity and use the legal principles to their own advantage. It is clear, that case law and various articles for and against courts lifting the veil still have the overriding basis that parliament would not have intended to create an opportunity for fraud and various wrongful acts to be allowed due to a statute they created. As a result, the courts allow; in exceptional circumstances, the corporate veil to be lifted. ...read more.