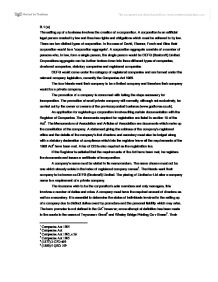 Company law - case study on setting up a business.

B.1 (a) The setting up of a business involves the creation of a corporation. A corporation is an artificial legal person created by law and thus has rights and obligations which must be adhered to by law. There are two distinct types of corporation. In the case of David, Eleanor, Frank and Gina their corporation would be a 'corporation aggregate'. A corporation aggregate consists of a number of persons who, in law, form a single person, the single person would be DEFG (Boatcraft) Limited. Corporations aggregate can be further broken down into three different types of companies; chartered companies, statutory companies and registered companies. DEFG would come under the category of registered companies and are formed under the relevant company legislation, currently the Companies Act 1985. The four friends want their company to be a limited company and therefore their company would be a private company. The promotion of a company is concerned with taking the steps necessary for incorporation. The promotion of small private company will normally, although not exclusively, be carried out by the owner or owners of the pre-incorporated business (www.godloves.co.uk). An application for registering a corporation involves filing certain documentation with the Registrar of Companies. The documents required for registration are listed in section 10 of the Act1. The Memorandum of Association and Articles of Association are documents which make up the constitution of the company. A statement giving the address of the company's registered office and the details of the company's first directors and secretary must also be lodged along with a statutory declaration of compliance which lets the registrar know all the requirements of the 1985 Act2 have been met. ...read more.

This was demonstrated in the case of Webb v Earle9 A Debenture is not regarded as a share but as a loan and is the usual form a company takes to borrow money. The debenture holder is a creditor and not a member of the company. There are many types of debentures. A secured debenture is a debenture which is secured by placing a charge on the company's assets. This is done either by the creation of a provision in the debenture or by terms held in the trust deed which deals with the issue. (ii) Debentures may be secured by 'means of a fixed or floating charge, or by a combination of both'. (Keenan et al, Company Law, "Debentures and Charges", pg 422) A fixed charge takes the form of a legal mortgage. It usually applies to specified assets such as the company land and building and fixed plant. The charge is created by a deed held under the Law of Property Act 1925 section 85 (1). By securing the debenture against the company the friends can ensure the company's overdraft. In the event the friends have no land or buildings the bank can take a fixed charge over their books. While under a fixed charge the company can not do away with the assets to which the charge is applied. A floating charge is not attached to any particular assets which the company may hold at the time of the charge. ...read more.

A petition for the winding-up may be placed. In the event of this happening a liquidator is appointed who realises the assets and pays the creditors. After the company's affairs are wound up the court passes an order dissolving the company. DEFG (Boatcraft) Limited would be a case of the members winding-up the business. Section 84 of the Insolvency Act 1986 provides that voluntary liquidation may commence if a fixed period has been settled for the duration of the company and the fixed period has passed, if the company resolves to be wound up voluntarily by special resolution or if the company resolves by special resolution to be wound up on the basis that it cannot by reason of liabilities continue its business. Once the required resolution is obtained a notice of theresolution must be published within 14 days in the Edinburgh Gazette14. The winding up then commences on the day that the resolution is passed15. Under the Insolvency Act, there are two procedures that can be followed in voluntarily liquidation. When members' voluntarily wind-up the company a statutory declaration of solvency is delivered to the registrar. If the directors are unable to make a declaration, the winding-up proceeds as a creditor's voluntary winding up. After the liquidator has realised the company's assets, he must pay off the company's debts. Once distribution is completed the liquidator must call a meeting of the relevant parties in order to present the accounts. These final accounts along with a return of the meeting are then lodged with the Registrar. Once the Registrar receives this information he lodges the accounts and within three months of receipt the company will be dissolved. ...read more.