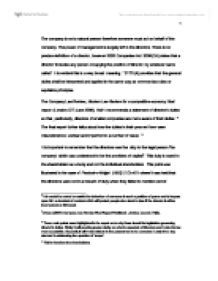 The company is not a natural person therefore someone must act on behalf of the company. The power of management is largely left to the directors. There is no precise definition of a director, however S250 Companies Act 2006(CA) states that a director 'includes any person occupying the position of director, by whatever name called'. It is evident this is a very broad meaning. 1 S170 (4) provides that the general duties shall be interpreted and applied in the same way as common law rules or equitable principles. The Company Law Review, Modern Law Review for a competitive economy: final report. (London: DTI June 2006), Vol 1 recommends a statement of director's duties so that, particularly, directors of smaller companies are more aware of their duties.2 The final report further talks about how the duties in their present form were misunderstood, unclear and imperfect in a number of cases. 3 It is important to remember that the directors owe the duty to the legal person 'the company' which was understood to be the providers of capital4. This duty is owed to the shareholders as a body and not the individual shareholders. This point was illustrated in the case of Percival-v-Wright (1902) 2 Ch 421 where it was held that the directors were not in a breach of duty when they failed to mention secret takeover negotiations to individual shareholders as the court took the view that premature disclosure of the takeover negotiations would have been detrimental to the shareholders. The CA 2006 re-states the common law position in s170 (1) ...read more.

In order to restrict the potential abuse of power within the corporation, directors in exercising their powers are subject to a number of controls and restrictions imposed by statute, common law and equity. In law directors are fiduciaries and agree to undertake to act for, or on behalf of the company where they have been appointed. Fiduciary duties can be seen to be an umbrella term to cover many aspects of director's duties in common law18. It can now be argued that at times this can be seen as unclear therefore the introduction of the CA 2006 can be said to bring greater clarity as it breaks down all the duties separately. A key principle applicable to anyone in a fiduciary position is that a director must avoid actual or possible conflicts of interests or duties. The case of Aberdeen Railway Co-v- Blaikie Bros (1854) 1 Macq 461 where it was classically stated in the following terms, 'No one, having such duties to discharge, shall be allowed to enter into engagements in which he has, or can have a personal interest conflicting, or which possibly may conflict, with the interests of those whom he is bound to protect'. CA 2006 S175 (1) accurately reflects the dictum above and codifies an approach long held at common law. Jason points out a very important issue that under common law, a conflict of interest caused by the director can only be excused or approved by the shareholders unless there are other procedures provided for in the articles of association (add case). ...read more.