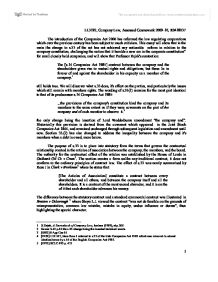 The introduction of the Companies Act 2006 has reformed the law regulating corporations which over the previous century has been subject to much criticism. This essay will show that in the main the change to s.33 of the act has not achieved any noticeable reform in relation to the company constitution, challenging the notion that it heralds a new era in the corporate constitution" for small closely held companies, and will show that Professor Rajak's contention: The [s.14 Companies Act 1985] contract between the company and the shareholders gives rise to mutual rights and obligations, but these lie in favour of and against the shareholder in his capacity as a member of the company.1 still holds true. We will discover what s.33 does, it's effect on the parties, and particularly the issues which still remain with members rights. The wording of s.33(1) remains for the most part identical to that of its predecessor s.14 Companies Act 1985: ...the provisions of the company's constitution bind the company and its members to the same extent as if they were covenants on the part of the company and of each member to observe it.2 the only change being the insertion of Lord Wedderburns amendment "the company and". Historically this provision is derived from the covenant which appeared in the Joint Stock Companies Act 1844, and remained unchanged through subsequent legislation and amendment until now. Section 33.(2) has also changed to address the inequality between the company and it's members when a debt is owed, more below. The purpose of s.33 is to place into statutory form the terms that govern the contractual relationship created in the articles of association between the company, the members, and the board. ...read more.

I do not think in saying that I am in any way departing from or extending certain observations of Astbury J in ...Hickman." In that case a director who was also a member sought to invoke an arbitration clause contained in the articles, because he was being sued in his capacity as a director , not as a member, he could not rely on the statutory contract. It is shown that Hickman has laid some of the controversy to rest but a subsequent academic argument remains. This centres around the question; what personal rights bestowed on a member by virtue of his position within the company structure can be enforced. The first line of argument coming from Lord Wedderburn in his article "Shareholders' rights and the rule in Foss v Harbottle" 24 puts forward that: ...a member can compel the company not to depart from the contract with him under the articles even if that means indirectly the enforcement of 'outsider'-rights vested in either third parties of himself, so long as,..,he sues as member qua member and not qua outsider. This is in-line with the Hickman and Beattie decisions. The conflicting argument comes from Professor Gower, who proposed that "...the articles have no direct contractual effect in so far as they purport to confer rights or obligations on a member otherwise than in his capacity of a member."25 as a member would only be able to enforce those rights which affect him as a member qua, and not if the right confers a benefit in his capacity as an outsider. A third line enunciated by G.D. ...read more.

The Companies Act 2006 has for the first time brought some much needed efficiency and cohesion to English corporate law, such as the codification of directors duties, and introduced changes to the formation of companies. It can easily be argued that as a whole the document heralds a new era in corporate governance. However as we have shown the simple rewording of s.33 falls far short of this claim in relation to the companies constitution, the change to s.33(1) is superficial and only manages to codify an area of law already decided, s.33(2) does redress the imbalance, but this was an obvious need. The core issues still remain, how the membership of the company relates to each other in their capacity as 'insiders' and 'outsiders', the identification of rights a member can claim, particularly those which also effect him as an outsider and how best to achieve a consistent application of enforcement of those rights. All of the academic argument still remains, particularly in relation to the the distinction between a members personal proprietary rights and internal irregularities, in the writers opinion this conflict is not one which can be defined in a statute as the long term approach argued by Drury applies and each case is best judged on it's own merits. Some clarity could have been brought by a statutory distinction of how the section relates to public companies with a large membership base and private closely held companies 'quasi partnerships' which takes account of a relational approach and judges each case on it's merits allowing for an equitable remedy on a case by case basis. One final criticism is that the failure to incorporate the position of shareholder agreements within the company constitution, undervalues their position as a beacon of individual consistency relating to members interests. Word count: 3226 including footnotes. ...read more.