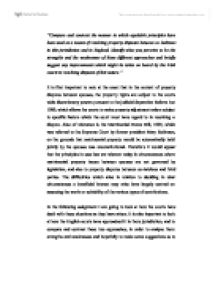 Compare and contrast the manner in which equitable principles have been used as a means of resolving property disputes between co-habitees in this jurisdiction and in England.

"Compare and contrast the manner in which equitable principles have been used as a means of resolving property disputes between co-habitees in this jurisdiction and in England. Identify what you perceive to be the strengths and the weaknesses of these different approaches and briefly suggest any improvements which might be taken on board by the Irish courts in resolving disputes of this nature." It is first important to note at the onset that in the context of property disputes between spouses, the property rights are subject to the courts wide discretionary powers pursuant to the judicial Separation Reform Act 1989, which allows the courts to make property adjustment orders subject to specific factors which the court must have regard to in resolving a dispute. Also of relevance is the Matrimonial Home Bill, 1993, which was referred to the Supreme Court by former president Mary Robinson, on the grounds that matrimonial property would be automatically held jointly by the spouses was unconstitutional. Therefore it would appear that the principles in case law are relevant today in circumstances where matrimonial property issues between spouses are not governed by legislation, and also to property disputes between co-habitees and third parties. The difficulties which arise in relation to deciding in what circumstances a beneficial interest may arise have largely centred on assessing the worth or suitability of the various types of contributions. ...read more.

There is definitely space for improvement in both approaches, and I believe maybe a compromise somewhere in between these to approaches would lead to a clearer and more flexible approach by the courts. Ireland, Indirect contributions. Indirect contributions are contributions made to the household which do not include the purchase price of the property or repayments of the mortgage. The law in this area has been unsettled for some time bur now appears to be well established and clear. During the 1970's and 80's there was an influx of case relating two this and from this two distinct approaches have appeared. The first approach was illustrated by Keane J7 where he established that there must be evidence of a common intention that indirect contributions will give the contributor a share in the beneficial interest in the property before the court would make such an order. The next approach can be found in the judgement of Finlay P in W. v. W8. The facts of the case were that the wife claimed indirect contribution on the grounds that there a home which was a working farm, was maintained and improvements made by her, this was rejected by the courts, she also claimed that her contribution on the farm allowed for payments on the mortgage to be made. ...read more.

The Canadian Unjust Enrichment approach, relies on a constructive trust theory, and is best summarised in the words of Dickson J17. "For the principle to succeed, the facts must display an enrichment, a corresponding deprivation, and the absence of any juristic reason, such as a contact or disposition of law for Enrichment". The Australian 'unconscionability' doctrine is very similar to Lord Denning's new model. Which is of no use to the idea of improving the system. But in New Zealand the reasonable expectations doctrine was created. Although similar to the Canadian approach it is still worth mentioning. In Daly v. Gilbert.18 The defendant had made it clear that she was unwilling to share the ownership of the disputed property. None the less her partner made several contributions in the form of labour materials, and carpeting etc. Hammond J. held that, while there had been no "reasonable expectation" of an interest in the property, it was nonetheless possible for the claimant to obtain a monetary remedy under the law of unjust enrichment. He upheld the claim in relation to the building work but not the carpet and curtains.19 In conclusion I feel the Irish approach is far superior to the English in a lot of ways, and reform is needed more so in that jurisdiction, possibly an application of the reasonable expectations doctrine or possibly a contribution from the Irish approach would lead to more fairness of the approach in England. ...read more.