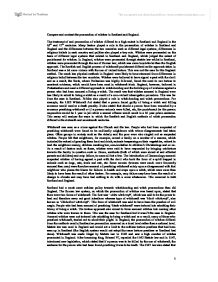 Compare and contrast the prosecution of witches in Scotland and England.

Compare and contrast the prosecution of witches in Scotland and England. The treatment of and prosecution of witches differed to a high extent in Scotland and England in the 16th and 17th centuries. Many factors played a role in the prosecution of witches in Scotland and England and the differences between the two countries such as different legal systems, differences in religious beliefs in each country and politics also played a key role. Witches were prosecuted on the basis of different legal systems that existed in Scotland and England, which judged the extent of punishment for witches. In England, witches were prosecuted through statute law whilst in Scotland, witches were prosecuted through the use of Roman law, which was more inquisitorial than the English approach. The Scottish and English process of witchcraft punishment differed as the approach taken in Scotland was a lot more vicious with the use of violent torture. This was not the case for the England method. The much less physical methods in England were likely to have stemmed from differences in religious belief between the two countries. Witches were believed to have signed a pact with the devil and as a result, the Scots, where Puritanism was highly followed, found the need to use torture to construct evidence, which would have been used in witchcraft trials. ...read more.

The 1547 law also stated that if a person was found to be practicing 'black witchcraft' in order to harm another human being, that person would be liable to a prison sentence of one year. The systems used to prosecute witches reveal profound differences between England and Scotland in this respect but with the death penalty the consequence of killing by witchcraft, the English prosecution system was moving towards one that was more in line with her Scottish acquaintances. The interrogation of suspected witches used by the English and Scottish differ to a high extent. It can be strongly argued that Scotland had the most brutal methods of interrogation of suspected witches on the continent. Witches were tortured in a despicable fashion. For example, some suspected witches would have their fingernails torn off while others may have had their legs shattered and on some occasions, witches would experience both forms of torture plus more. Other forms of torture such as isolation and sleep deprivation were also commonly used in the interrogation process. The aim of these acts of torture in the interrogation process was to force suspected witches into confessing to being a witch as well as naming their accomplices. ...read more.

In England a different legal system was used from that in Scotland and took a much less extreme approach towards the interrogation of suspected witches. Different religious beliefs in Scotland and England may have explained the profound differences between the English and Scottish prosecution system. Although the English prosecution system was brought more into line with that of Scotland in terms of the introduction of the death penalty for those found guilty of killing through witchcraft, the manner in which witches were killed differs greatly with the burning of witches in Scotland as opposed to hanging witches in England. This indicates major differences in the extremity of the punishment in the eyes of the Scottish and the English. After the mid 1600's, the prosecution of witches began to decline and there is little evidence of witch-hunting and witch prosecutions there after (in the 17th and 18th centuries). However, when witch prosecutions were at their peak, there were mainly differences rather than similarities between the Scottish and English approach to the notion of witchcraft and resulting witch prosecutions. 1 Alan C. Kors and Edward Peters. 'Witchcraft in Europe. 1100-1700. A Documentary History' (University of Philadelphia Press. Inc., 1972). P. 194. 2 Christina Larner. 'Witchcraft and Religion. The Politics of Popular Belief'. (Oxford, 1984). P. 31. 1 ...read more.