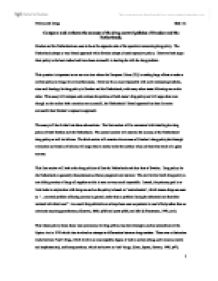 Compare and evaluate the success of the drug control policies of Sweden and the Netherlands.

Compare and evaluate the success of the drug control policies of Sweden and the Netherlands. Sweden and the Netherlands are seen to be at the opposite ends of the spectrum concerning drug policy. The Netherlands adopts a very liberal approach while Sweden adopts a harsh repressive policy. However both argue their policy is the best method and have been successful in dealing the with the drug problem. This question is important as we are at a time where the European Union (EU) is making large efforts to make a unified policy on drugs for all member states. However this is near impossible with such contrasting methods, aims and ideology for drug policy in Sweden and the Netherlands, with many other states following one or the other. This essay will compare and evaluate the policies of both states' drug policy and will argue that even though on the surface both countries are successful, the Netherlands' liberal approach has been far more successful than Sweden's repressive approach. The essay will be divided into three sub-sections. The first section will be concerned with detailing the drug policy of both Sweden and the Netherlands. The second section will examine the success of the Netherlands' drug policy as well its failures. The third section will examine the success of Sweden's drug policy but through evaluation and details of failures will argue that in reality under the surface it has not been that much of a great success. This first section will look at the drug policies of first the Netherlands and then that of Sweden. Drug policy for the Netherlands is generally characterised as liberal, pragmatic and rational. The aim for the Dutch drug policy is not ridding society of drugs all together as this is seen as very much impossible. Instead, the primary goal is to limit risks in conjunction with drug use and so the policy is based on 'normalisation', which means drugs are seen as "...a normal problem affecting society in general, rather than a problem facing the abnormal and therefore isolated individual user." ...read more.

Others simply come to the Netherlands to purchase drugs and take them home to make a profit. Many of the Netherlands' neighbouring states are annoyed by this and so does the fact that 80% of the EU's amphetamines are of Dutch manufacture. However, from a realist perspective, states do what they can to protect their state and its own people and therefore the negative consequences on other states are not an issue. Nevertheless, the Netherlands have undertaken more repressive policies to discourage foreign tourism and to "ensure that any effects of the Dutch drug policy may have on other states will be anticipated and dealt with by themselves," (Chatwin, 2003, p570). The police and customs officials of the relevant countries are now working together to control large scale drug trafficking organisations operating across the borders, (Dorn, 1999, p204 and Clutterbuck, 1995, p152). It has been argued that the policy cannot have been that successful as there has been increasing polices of a repressive nature. For example the "frequent use of the municipal by-law by which the open use of drugs is prohibited with arrest and conviction of users," (Dorn, 1995, p204) or the 'streetjunkie project', which is a package of measures designed to push and force the group of so called 'extremely problematic drug users' to kick the habit. Another policy is the 'binnenstadverbad', which is a 'city centre banning order', by which drug users who repeatedly cause public disturbance may be refused entry to a substantial part of the city centre for a fortnight, (Mol & Trautmann, 1995, p220). However, just because a certain policy works well at one time it does not mean it should be kept unchanged. With drugs there is a need for flexibility to deal with new problems or certain problems coming to the forefront which may arise. An increase in repressive policy for certain aspects is judged to be the best for further success and therefore should be followed but in no way has the Netherlands lost their liberal, pragmatic approach. ...read more.

This may partially account for much of the variation in heroin addiction between the Netherlands and Sweden. Ollson and Lenke argue that the statistical explanatory power of repressive policies if one excludes the peripheral position and low unemployment of Sweden during the 1980s results in it being 'not statistically significant', meaning repressive policies are not significant for explaining the low drug use and problems in Sweden (Dorn, Jepsen and Savona, 1996, pp109-110). One has to look at the drug use and problems in the context of the country, and its culture and history. Historically, Sweden has not had a problem with illegal drug use and their culture has been that of conformity. The Swedish population in general has a negative view of drug use and is convinced that drugs pose a major threat to society. In conclusion, the problems of drugs in our society is so complex, no nation's drug policy will work completely. The Netherlands have a liberal drug policy and it seems to have worked well. On the other hand the Swedish have a repressive policy and it seems to have worked on the surface but in reality is has not at all very well. The success gained by Sweden can be more explained by their previous more liberal policy in the 1960s and 1970s and also the lack of exposure to the drugs market and low unemployment as well as their inherent culture. The implications of this is that for other countries aiming to formulate an effective drug policy may observe the Netherlands greater success and move towards a liberal drugs policy. Moreover, it is impossible to reach a common drug policy for the whole EU with such contrasting approaches and therefore in the future if the EU was ever to push for a unified drug policy, it may also move more towards a liberal approach. I acknowledge the ambiguity of the effects of such a liberal or repressive drug policy may have on other countries but this is unavoidable. ...read more.