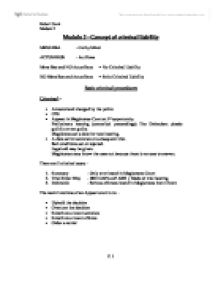 Module 3 - Concept of criminal liability MENS REA - Guilty Mind ACTUS REUS - Act Done Mens Rea and NO Actus Reus = No Criminal Liability NO Mens Rea and Actus Reus = Strict Criminal Liability Basic criminal procedures Criminal: - * Arrested and charged by the police * CPS * Appear in Magistrates Court at 1st opportunity. Preliminary hearing (committal proceedings) The Defendant pleads guiltily or not guilty. Magistrates set a date for next hearing. * A date set for sentence or subsequent trial. Bail conditions set or rejected. Legal aid may be given. Magistrates may throw the case out because there is no case to answer. There are 3 criminal cases: - 1. Summary - Only ever heard in Magistrates Court 2. Trial Either Way - 1861 OAPA s47 ABH / Mode of trial hearing 3. Indictable - Serious offences heard in Magistrates then Crown The main functions of an Appeal court is to: - * Uphold the decision * Overturn the decision * Substitute a lower sentence * Substitute a lower offence * Order a retrial Judicial Precedent Law can be made in a court or be passed by Parliament. R v R 1991. This is a good example 1956 SOA Criminal Liability 1. THEFT ACT 1968 s1 "A person is guilty of theft if he dishonestly appropriates property belonging to another with the intention to permanently deprive the other of it; and 'theft' and 'steal' shall be construed accordingly." MR.: Dishonestly AR: Appropriation Intention to permanently deprive Property Belonging to another 2. ABSOLUTE LIABILITY R v Larsonneur 1933 STATE OF AFFAIRS CRIME - A French woman was deported to Ireland and then sent back to England. When she arrived in England she was prosecuted for being in England. AR: Set foot in England MR.: None Winzar v Chief Constable of Kent 1983 - Taken to hospital but discharged. ...read more.

Essex fails and gives these children to the fosterers. * Damage was foreseeable * Was sufficient proximity * Cant impose a duty of care to a public body 2. Legal Profession Rondel v Worsley 1969 - W makes a mess of the case and R tries to sue. Seen as not fair, just, and reasonable to impose a duty Saif Ali v Sidney Mitchell & Co. 1977 - Established that you cannot sue a solicitor for his work IN court. Arthur J.S. Hall & Co. v Simons 2000 - HOL decided that previous decisions were wrong. Reversed the law to allow Barristers and Solicitors to be sued for in or out of court negligence. 3. Armed forces. Mulcahy v MOD 1966 - On exercises his ears where perforated. Whilst on duty your employer has no duty of negligence Rigby v Chief constable North Hampshire 1985 - Fired CS gas into a building. Meant to have fire brigade present but didn't. Building went on fire. Was just, fair, and Reasonable so not sued? 4. Fire brigade If they fail to do something, they may not be negligent. But if they do something negligent then they can be sued. John Munrowe v London FB 1966 - Put out fire but didn't check joining building which caught fire Capital & Countess PLC v Hampshire CC 1966 - FB turned off the sprinkler system which made the fire worse. This was an act and not an omission so it was fair, just, and reasonable to impose a duty of care. 5. Coastguards OLC v Home Department 1997 - OLC (coastguards) It is worked out on if the coastguard has caused more damage by turning up than if they had not turned up. Test 2 - Breach of duty of care Whether or not the defendant has breached his duty is tested objectively, in other words not what the defendant thought he was doing, but what the reasonable person with the appropriate degree of knowledge would have done. ...read more.

Redland Brick Ltd won. Interlocutory Injunctions These are more difficult to obtain as they attempt to stop action before any damage has occurred. The claimant must prove to the court that there is a serious risk that damage will occur without the injunction. On the other hand, if the defendant can prove that no damage would have occurred the court may award damages against the claimant. Other sources of compensation So far we have assumed that a victim of crime or negligence may be able to claim compensation through the civil courts. In practice this may be impossible or impractical. 1. The person(s) responsible for the negligence may be unknown. E.g. 'hit and run' driver 2. The person(s) may be known but it is difficult to identify where the blame lies � Herald of free enterprise 3. The defendant may be liable but in no financial position to pay damages if they are awarded against him. 4. No legal aid for personal injuries except in medical negligence. Conditional fees known as 'No win, No fee' are only taken on when there is a very high likelihood that the claimant will succeed. Other Sources of compensation 1. State funded sources - Industrial injuries scheme are paid out of tax payer's money. Used in work cases. No payment is received for the first 15 weeks. 1 off payment for long term. 2. Criminal Injuries Compensation Board (CICB) - Ranges from �1,000 to �250,000. claim up to an additional �30,000 for loss of earnings 3. Insurance Companies - At work - Employers Liability Act 1969 Roads - Road Traffic Act 1988 Motor Insurance bureau 4. Following a highly publicised accident, funds are set up so that the public can contribute. Sometimes these funds can amount to 100's and 1000's of pounds resulting in significant payments for individual victims. End of Module 3 Started on 11th September 2001 Finished on 18th December 2001 Robert Cook Module 3 P. 1 ...read more.