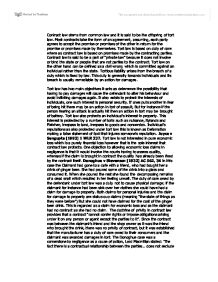 Contract law stems from common law and it is said to be the offspring of tort law. Most contracts take the form of an agreement, assuming, each party agrees to accept the promise or promises of the other in return for the promise or promises made by themselves. Tort law is based on duty of care where as contract law is based on promises made by the contracting parties. Contract law is said to be a part of "private law" because it does not involve or bind the state or people that are not parties to the contract. Tort law on the other hand can be defined as a civil wrong which is committed against an individual rather than the state. Tortious liability arises from the breach of a duty which is fixed by law. This duty is generally towards individuals and its breach is usually remediable by an action for damages. Tort law has two main objectives it acts as deterrence the possibility that having to pay damages will cause the defendant to alter his behaviour and avoid inflicting damages again. It also exists to protect the interests of individuals, one such interest is personal security. If ones puts another in fear of being hit there may be an action in tort of assault, But for instance if the person fearing an attack is actually hit then an action in tort may be brought of battery. Tort law also protects an individual's interest in property. This interest is protected by a number of torts such as nuisance, Rylands and Fletcher, trespass to land, trespass to goods and conversion. Individual's reputations as also protected under tort law this is known as Defamation making a false statement of fact that injures someone's reputation. Joyce v Sengupta [1993] 1 WLR 337. Tort law is not interested in pure economic loss which is a purely financial loss however that is the sole interest that contract law protects. ...read more.

advantage of a tortious claim, rather than a contractual claim by having a look at the similarities and differences of the two areas of law. In some senses both areas of the law are significantly similar as they both rise to obligations. However tort obligations are imposed by the law; it is not normally a choice one makes whereas contracts are made by people that voluntarily create obligations upon themselves. Another similarity of both contract and tort is that breach of both types of law rises to an action in damages. Furthermore both contract and tort are apart of civil law, it is the Civil courts that have jurisdiction to hear contract and tort claims. Despite the similarities between contract and tort, it is easy to identify ways in which contract and tort remain separate. The main reason perhaps a claimant may choose to claim in tort rather then contract is the difference in the rules for the limitation periods. This is the time period within which a claimant must bring an action. The limitation period for both contract and tort law begins to run with the accrual of the cause of action, accrual, is a common law concept, and can be is defined differently for contract and tort. In contract, the cause of action accrues on breach whereas in tort, the cause of action accrues when the damage occurs. If the damage coincides with the breach then the breach may occur when the duty occurs or it may possibly be sometime after. The basic rule for both contract and tort is that the limitation period is six years (Limitation Act 1980) however claims for personal injury are limited to a period within three years of the date of knowledge of the damage (Limitation act 1980 s 11 (4).) Cartledge v E Jobling & sons Ltd [1963] AC 758. The relevant knowledge required is of fact not of law (s 14 (1)) ...read more.

However, the party wishing to rely on the tortious remedy can only do so if it does not lead to inconsistency with the express or implied terms of the contract. Also Contractual and tortious remedies can be excluded and/or restricted by contractual terms provided such terms do not, to the extent applicable, breach the test of reasonableness contained within the Unfair Contract Terms Act 1977. Furthermore Depending on the facts of the case, it may be possible for the tortious duty to extend further than the contractual duty. Concurrent liability allows the claimant to bring a claim in the area of law which he feels with benefit him more. However this would not be fair on the defendants therefore to balance the rights of the parties defendants are able to raise the defence of contributory negligence in tort law. Another difficulty in concurrent liability is the question of limitation which usually favours the defendant, as the claimant may possibly be past the limitation period and the claim is stattued barred. If the plaintiff brings concurrent claims he or she may take advantage of whichever is the more favourable time period. For example, in the case of Midland Bank Trust Co. Ltd v Hett Stubbs and Kemp, where a negligent solicitor had failed to register an option to purchase, if the plaintiff had been restricted to suing in contract the six year limitation period under the Limitation Act 1939, would have effectively barred any claim before the harm occurred and before the victim could have taken any steps to prevent it. There is much to be said for removing unfair time periods. One method of removing these limitations could be by modest legislative reform. Alternatively to include in limitation statutes provision for the exercise of judicial discretion. All in all it can be suggested that there is a significant overlap on both areas of law and in most cases concurrent liability which to be fair can be advantageous to either the claimant or defendant. ...read more.