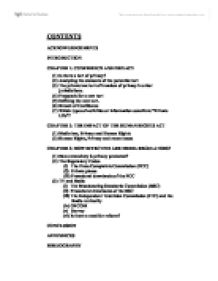 CONTENTS ACKNOWLEDGEMENTS INTRODUCTION CHAPTER 1: CONFIDENCE AND PRIVACY (1) Is there a tort of privacy? (2) Analysing the elements of the potential tort (3) The private law tort of invasion of privacy in other jurisdictions. (4) Proposals for a new tort (5) Defining the new tort. (6) Breach of Confidence (7) Which types of activities or information constitute "Private Life"? CHAPTER 2: THE IMPACT OF THE HUMAN RIGHTS ACT (1) Media law, Privacy and Human Rights (2) Human Rights, Privacy and recent cases CHAPTER 3: HOW EFFECTIVE ARE MEDIA REGULATORS? (1) How extensively is privacy protected? (2) The Regulatory Codes (i) The Press Complaints Commission (PCC) (ii) Private places (iii) Procedural drawbacks of the PCC (3) TV and Radio (i) The Broadcasting Standards Commission (BSC) (ii) Procedural drawbacks of the BSC (iii) The Independent Television Commission (ITC) and the Radio Authority (iv) OFCOM (v) Survey (vi) Is there a need for reform? CONCLUSION APPENDICES BIBLIOGRAPHY CHAPTER 1: CONFIDENCE AND PRIVACY (1) Is there a tort of invasion of privacy? It has often been said that the English law does not recognise a right to privacy 'as such'.1 It has been widely agreed that privacy rights might find incidental protection by causes of action designed to protect other interests, but there is no distinct cause of action for 'invasion of privacy'.2 This point was graphically illustrated in the case of Kaye v Robertson.3 This case involved a well known actor who had undergone extensive surgery and was in hospital when he was photographed and allegedly interviewed by a tabloid newspaper. The journalist and the photographer for the newspaper ignored notices asking visitors to ask permission from a member of staff before visiting patients. The claimant relied on causes of action in libel, trespass to the person, passing-off and malicious falsehood. It was accepted by the claimant's lawyers that his rights could not be protected by an action for breach of privacy. ...read more.

It was an issue of fact and degree for the regulator.122 The significance of the specialist role of media regulators in determining what is meant by "privacy" was also emphasised in the case of R v Broadcasting Complaints Commission, ex parte BBC.123 In this case, the BBC had secretly filmed several sales transactions in Dixons stores to check whether they were selling some second hand goods as new. The BSC held that the actions of the BBC had amounted to an unwarranted infringement of Dixons' privacy. The BBC decided to challenge this adjudication through judicial review arguing that a company could cot complain about an infringement of privacy because this was by its very nature personal and human in nature. However, the Court of Appeal upheld the decision of the BSC because complaints of invasion of privacy could be made by a corporate body.124 The court of appeal made it very clear that media regulators had a "broad licence" in exercising their judgement and discretion in relation to complaints of infringement of privacy. Lord Woolf summarised this position in the following terms: "So long as the approach which the BSC adopt is one to which, in their statutory context, the words 'infringement of privacy' are capable of applying then the courts should not interfere. It is only if an approach of 'infringement of privacy' by the BSC goes beyond the area of tolerance that the courts can intervene". However, both the Ex parte Granada and Ex parte BBC cases involved challenges by the media to adverse privacy adjudication. In both cases the regulator had given the Code an interpretation which was probably wider than that required by the common law or Article 8. The position may have been different if the regulator had taken a narrower interpretation of 'privacy' than the common law or article 8, as illustrated in the case of R (Ford) ...read more.