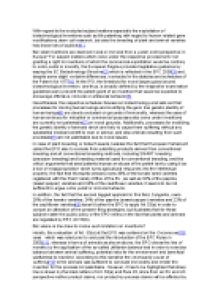 Consider the idea of inventions the commercial exploitation of which would be contrary to ordre public or morality. [EPC2000, Article 53(a)] Contrast these types of patent subject matter with other related subject matter which has been found to be patentable. Where do the borders of morality/immorality seem to lie in current law?

﻿With regard to the excluded subject matters especially the exploitation of biotechnological inventions such as life patenting with regard to human related gene modifications, stem cell research, but also the breeding of plant and animal varieties has drawn lots of publicity[1]. But what inventions are deemed moral or immoral from a public ordre perspective in Europe? For subject matters which come under the respective provisions for not granting a right to inventions of which the commercial exploitation would be contrary to ordre public or morality, the European Regime provided legislative guidance by issuing the EC Biotechnology Directive[2] which is reflected in the EPC 2000[3] and, despite some slight verbatim differences, is enacted in the statutes and schedules of the Patent Act 1977[4]. At the IPO, the threshold for moral issues goes beyond biotechnological invention, and thus, is broadly defined by the respective examination guidelines as to prevent the patent grant of an invention that would be expected to encourage offensive, immoral or antisocial behavior[5]. Nevertheless, the respective schedule focuses on biotechnology and sets out that processes for cloning human beings and modifying the germ line genetic identity of human beings[6] are clearly excluded on grounds of immorality, whereas ...read more.

53(a) at the EPO was centered on the Oncomouse[10] case. which was ruled prior to and post the introduction of the EPC Rules in 2000[11], whereas in terms of animals as shown above, the EPO draws the line of morality by the application of the so-called utilitarian balance test in order to exercise balance between animal suffering, potential risks for the environment and beneficial usefulness to mankind. According to this narrative the necessarily cause of suffering[12] to the animals was sufficient to conclude immorality and render the invention for the process not patentable. However, it has to be highlighted that sharp line is drawn by the black letters of Art. 53(a) and Rule 28, since from an EU and UK perspective neither product claims, nor product-by-process claims will be affected by the non-patentability of biological processes in the above scope[13]. Albeit the established cost-benefit-test with regard to Art. 53(a), in Plant Genetic Systems the EPO Opposition Division neglected to employ the test in the opposition proceedings, because there was no sufficient prove to quantify the reasons for the objection. ...read more.