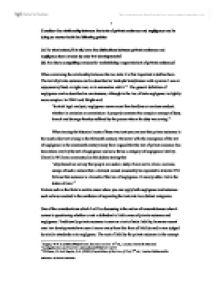 Consider the relationship between the torts of private nuisance and negligence and in doing so answer both the following points: (a) To what extent, if at all, have the distinctions between private nuisance and negligence been eroded by case-law developments? (b) Are there compelling reasons for maintaining a separate tort of private nuisance? When examining the relationship between the two torts it is first important to define them. The tort of private nuisance can be described as 'unlawful interference with a person's use or enjoyment of land, or right over, or in connection with it'1. The general definition of negligence can be described as carelessness, although in the law of torts negligence is slightly more complex. In 1934 Lord Wright said: 'In strict legal analysis, negligence means more than heedless or careless conduct, whether in omission or commission: it properly connotes the complex concept of duty, breach and damage thereby suffered by the person whom the duty was owing.'2 When tracing the historical roots of these two torts you can see that private nuisance is the much older tort arising in the thirteenth century. However with the emergence of the tort of negligence in the nineteenth century many have argued that the tort of private nuisance has been taken over by the tort of negligence and now forms a category of negligence liability. Glanville Williams commented on this debate stating that 'why should we not say that people are under a duty of care not to allow a noxious escape of such a nature that a claimant cannot reasonably be expected to tolerate it? ...read more.

and the development of the law of negligence in the past 60 years points strongly to a requirement that such foreseeabilty should be a requirement of liability for damages in the law of nuisance.9 However Lord Goff did mention the problems of using fault based principles with the stricter aspects of private nuisance 'the principle is one of strict liability in the sense that the defendant may be held liable notwithstanding that he has exercised all due care to prevent the escape from occurring.'10 . Another case demonstrating the role of fault in private nuisance cases is Sedleigh-Denfield v. O'Callaghan.11 In this case, the local authority without the defendants permission had placed a drainage pipe in a ditch on the defendants' land with a grate put on stop to prevent leaves getting blocked.. The grating had not been fixed in the correct place with the result that during a heavy rainstorm, the pipe had become choked with leaves and water had overflowed onto the claimant's land. The defendants were found liable for adopting and continuing the nuisance caused by the local authority. The important aspect of this decision is that they were liable for continuing the nuisance due to their failure to take reasonable steps to prevent it despite being aware of the problem. 'In my opinion an occupier of land continues a nuisance if with knowledge or presumed knowledge of its existence fails to take any reasonable means to bring an end though with ample time to do so.12' Here it is demonstrated how the law has developed in private nuisance moving away slightly from the notion strict liability and adopting an attitude which is familiar of that of negligence. ...read more.

In my judgement very similar considerations arise whether the court is determining the scope of the measured duty of care or whether it is fair, just and reasonable to impose a duty to the extent of that duty.' 21 The above cases illustrate the erosion of the differences between private nuisance suggesting that negligence is indeed taking over. However the case of Hunter v Canary Wharf 22suggests otherwise. It is this case which emphasises the importance of maintaining a distinction between private nuisance and negligence. This case decided to depart from the decision that the scope of those individuals who had a right to sue in private nuisance should be extended which was evident in the case of Khorasandjian23. Instead the judges reaffirmed the original principles of private nuisance stating that it was necessary to have a proprietary interest to sue in private nuisance and that in an action in nuisance there must be a specific type of injury, as opposed to negligence where the an action in negligence can be brought about by a claimant if a duty of care has been breached. Therefore for the time being private nuisance and negligence remain two completely separate torts, although the confusion of their differences remain. To conclude I believe that from examining the above cases that the relationship between the two torts is a complex one and until judges make clearer distinctions when assessing private nuisance and negligence the debate will continue on the relevance of maintaining distinction. ...read more.