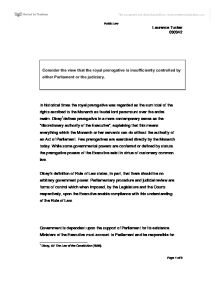 Consider the view that the royal prerogative is insufficiently controlled by either Parliament or the judiciary.

In historical times the royal prerogative was regarded as the sum total of the rights ascribed to the Monarch as feudal lord paramount over the entire realm. Dicey1defines prerogative in a more contemporary sense as the "discretionary authority of the Executive", explaining that this means everything which the Monarch or her servants can do without the authority of an Act of Parliament. Few prerogatives are exercised directly by the Monarch today. While some governmental powers are conferred or defined by statute the prerogative powers of the Executive exist in virtue of customary common law. Dicey's definition of Rule of Law states, in part, that there should be no arbitrary government power. Parliamentary procedure and judicial review are forms of control which when imposed, by the Legislature and the Courts respectively, upon the Executive enable compliance with this understanding of the Rule of Law. Government is dependent upon the support of Parliament for its existence. Ministers of the Executive must account to Parliament and be responsible for their exercise of the royal prerogative. These obligations of accountability and responsibility are owed both to the Legislature and to the various parliamentary select committees. The Separation of Powers doctrine requires the Legislature to assume the responsibility to influence, constrain, and demand justification for the actions of government and give them legitimacy2. ...read more.

The Executive can only use prerogative powers remaining from 1689 which have not been abolished or curtailed by Parliament (BBC v Johns [1965] Ch 32 at 79, [1964] 1 All ER 923 at 941, CA). The Executive is subject to the rule of law. "The king has no power save that allowed by law" - Case of Proclamations (1611) 12 C0 Rep 74. The mechanism by which the courts ensure Executive use of prerogative power stays within the limits of authority that Parliament has granted is judicial review. In recent years judicial control of the prerogative appears less limited than it used to be. In R v Criminal Injuries Board ex part Lain [1967] 2 QB 864, 1967 2 All ER 770, DC ("Lain") full judicial review was extended to include government tribunals acting pursuant to prerogative powers. Lain was extended in the seminal case Council of Civil Service Unions v Minister Of State for the Civil Service [1985] AC 374 ("GCHQ"); the House of Lords found that the determinant of intensity of judicial review of a particular government power should not be whether the source of the power is prerogative or statute, but its purpose, what the power is intended to do. A key criterion developed in the GCHQ case was the concept of justiciability. ...read more.

In consequence the Human Rights Act, by subjecting the exercise of government powers to a version of the Rule of Law which is a good deal more rigorous than before, has given the Judiciary greater control over Executive application of prerogative. Today the exercise of judicial control of the royal prerogative has the effect of defining the reach of executive power as well as laying down guidelines for the use of this power. Judicial control provides a procedural framework for decision making as well as limiting any abuse or excess of power. Control over the exercise of the Royal Prerogative by the Legislature, inhibited as it is to a significant extent by the domination of the Commons by the Executive, leaves a great deal to be desired. The mechanism of judicial review allows the courts, within the limits of justiciability, to impose an apparently widening scrutiny of the use of government powers. The Human Rights Act (1998) has given the courts greater control over use of the Royal Prerogative. The deficiencies in control of the Royal Prerogative by the Legislature and the Judiciary are, in part, congruent not only with the concept of Separation of Powers, but also of the fact that the Government necessarily possesses prerogative powers in order to effectively govern. ...read more.

What about reform? Tony Benn MP campaigned extensively in the 1990s on the issue. Also see 'The Governance of Britain: Review of the Executive Royal Prerogative Powers: Final Report'.