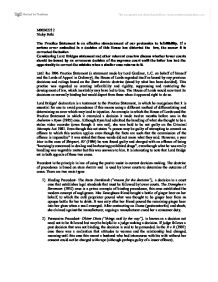 Considering Lord Bridges statement and other relevant case law discuss whether lower courts should be bound by an erroneous decision of the supreme court until the latter has had the opportunity to correct the mistake when a similar case returns to it.

The Practice Statement is an effective abandonment of our pretension to infallibility. If a serious error embodied in a decision of this House has distorted the  law, the sooner it is corrected the better.

Considering Lord Bridges statement and other relevant case law discuss whether lower courts should be bound by an erroneous decision of the supreme court until the latter has had the opportunity to correct the mistake when a similar case returns to it.

Until the 1996 Practice Statement (a statement made by Lord Gardiner, L.C. on behalf of himself and the Lords of Appeal in Ordinary), the House of Lords regarded itself as bound by any previous decisions and rulings based on the Stare decisis doctrine (stand by what has been decided). This practise was regarded as creating inflexibility and rigidity, suppressing and restricting the development of law, which inevitably may have led to bias. The House of Lords would now treat its decisions as normally binding but would depart from these when it appeared right to do so.

Lord Bridges' declaration is a testament to the Practice Statement, in which he recognises that it is essential for one to avoid precedence if this means using a different method of differentiating and determining an error which may lead to injustice. An example in which the House of Lords used the Practice Statement in which it overruled a decision it made twelve months before was in the Anderton v Ryan (1985) case. Although Ryan had admitted the handling of what she thought to be a stolen video recorder (even though it was not), she was held to be not guilty on the Criminal Attempts Act 1981. Even though this act states “a person may be guilty of attempting to commit an offence to which this section applies even though the facts are such that the commission of the offence is impossible” it was stated that these words did not mean what they said. However, a year later in the case of Shivpuri, RV (1986) he was found guilty and charged with an offence of being “knowingly concerned in dealing and harbouring prohibited drugs”, even though what he was really handling was vegetable matter but this was unaware to him. It is interesting to note that Lord Bridge sat in both appeals of these two cases.

Precedent is the principle in law of using the past to assist in current decision-making. The doctrine of precedence is based on stare decisis and  is used by lower courts to determine the outcome of cases. There are two main types:

Although Lord Bridges states it would be advantageous to correct erroneous decisions, and of course this would be the most “just” way in dealing with any case in my opinion, we cannot deny the foundations of the doctrine of precedent used in lower courts and the importance they have in English law such as providing:

There are also methods of avoiding precedent including distinguishing (finding differences in the facts), over-ruling and reversing which may help avoid the most disadvantageous factor of precedent which is the threat of injustice and therefore avoiding the overuse of the Practice Statement.

Stare Decisis vs. Judicial Activism: Nothing Succeeds Like Success