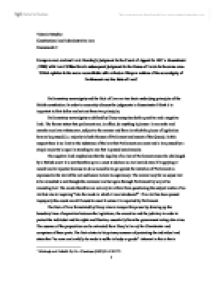 Constitutional and Administrative Law - Compare and contrast Lord Denning's judgment in the Court of Appeal in IRC v. Rossminster [1980] with Lord Wilberforce's subsequent judgment in the House of Lords in the same case.

Victoria Maschio Constitutional and Administrative Law Coursework 2 Compare and contrast Lord Denning's judgment in the Court of Appeal in IRC v. Rossminster [1980] with Lord Wilberforce's subsequent judgment in the House of Lords in the same case. Which opinion is the more reconcilable with orthodox Diceyan notions of the sovereignty of Parliament and the Rule of Law? Parliamentary sovereignty and the Rule of Law are two basic underlying principles of the British constitution. In order to accurately discuss the judgments in Rossminster I think it is important to first define and set out these two principles. Parliamentary sovereignty as defined by Dicey comprises both a positive and a negative limb. The former states that parliament can, in effect, do anything it pleases: it can make and unmake any laws whatsoever, subject to the manner and form in which the pieces of legislation have to be passed (i.e. majority in both Houses of Parliament and assent of the Queen). In this respect there is no limit to the substance of the law that Parliament can enact and a law passed by a simple majority is equal in standing to one that is passed unanimously. The negative limb emphasizes that the legality of an Act of Parliament cannot be challenged by a British court: it is not therefore up to a court to declare an Act invalid even if it applying it would lead to injustice because to do so would be to go against the intention of Parliament as expressed in the text of the act and hence violate its supremacy. ...read more.

Lord Denning's powerful speech in the Court of Appeal favoured the applicants: although not doubting that the warrant had been obtained in the manner set out by the Act he was disgusted at the way in which the operation was run and the refusal of the IRC in specifying the offence the applicants were suspected of being guilty of committing. He compared the search and seizure to that in Entick v Carrington2 where the Home Secretary authorised a raid on a printer's premises (i.e. Mr. Entick's) because he sympathised with a radical politician, John Wilkes, and the government were trying to suppress his publications in order to avoid him being voted in as an MP. Lord Denning doesn't merely read the Act and decide whether the facts and behaviour in question conform to it: instead proceeds to inquire into the manner in which it was passed. He tells us that the Act in question was "put forward by the government of the day", that it "passed by a narrow majority", that it was "opposed by many as being a dangerous encroachment on individual freedom". Not being satisfied he even inquires into the intention of Parliament as regards the subject matter of the Act: "why has Parliament done this? Why have they allowed this search and seizure by the Revenue officers?". In doing this he is going completely against the notion of Parliamentary sovereignty I have outlined above and with a view to giving what he considers ...read more.

Lord Denning sees as paramount the liberty of the individual and in protecting this comes perilously close to declaring that the Act of Parliament is invalid; Lord Wilberforce on the other hand understands that he cannot go against the statute and construes his argument accordingly on that basis, whilst suggesting that Parliament should take another look at it. In Lord Denning's view it cannot be the intention of Parliament to presume people guilty or to want to impose on their freedom and by backing his argument up with the fact that the Act was passed by a simple majority construes a strong argument in favour of amending the Act in question. Where he goes too far in terms of Parliamentary sovereignty is to take the decision himself not to implement it and in fact to completely disregard it. Lord Wilberforce on the other hand abides by the sovereignty proposition but at the initial expense of the citizen who is so forced to wait until the government decides whether it will bring proceedings against them. At that point if the claim is dropped they have a chance to obtain a remedy. The question is whether you can consider this governmental freedom necessary in order to ensure that citizens abide by the law or whether, as Lord Denning maintains, a similar discretion comes perilously close to the excess of power in Entick v Carrington5 and comparable in effect to the abuse of power in Liversidge v Anderson. ...read more.