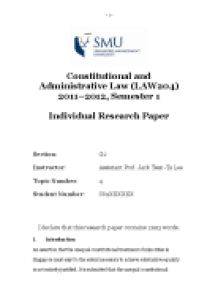 Constitutional Equality in Singapore. The predominant purpose of unequal treatment under the Constitution is not to achieve substantive equality, but to preserve multiculturalism and meritocracy.

Arts 152(2) recognises the special position of Malays and imposes a responsibility on the Government to protect the interests of Malays. Under Art 153, the Legislature is also under a duty to enact laws regulating the Muslim religion. One such law is the Administration of Muslim Law Act (?AMLA?)[48] that forms the statutory basis for the religious Syariah courts and the Majlis Ugama Islam Singapura, which oversees positive discrimination programmes such as the Mosque Building Fund.[49] These safeguards impose on the Government and Legislature a ?positive duty to provide? for the unequal treatment of constitutional minorities and constitute an added layer of protection for minority interests.[50] Hence, the transformative aspect of substantive equality is achieved. However, issues impacting individuals in terms of achieving an equality of outcomes may arise in Singapore?s effort to accommodate differences in a transformative dimension. The schoolgirl tudung controversy, the local equivalent of the Sikh schoolboy analogy discussed above, is one such example.[51] In this case, the ban on the Muslim headscarf was not lifted within the common domain of public schools. In contrast to the separate religious sphere of madrasahs, public schools are thought to be vital to nation building.[52] The issue did not go up to the courts but was resolved by a process of government persuasion and consultation.[53] A judicious balancing of interests, based on a policy-approach to protecting minorities, was able to accommodate difference in a transformative dimension. C. The redistributive dimension at odds with meritocracy The redistributive dimension of substantive equality offends Singapore?s policy of meritocracy. In this sense, the assertion that the unequal constitutional treatment of minorities seeks to achieve substantive equality is entirely misplaced. Unlike the Malaysian special position clause, the Singaporean scheme does not operate to achieve a redistributive dimension of substantive equality. Art 153 of the Federal Constitution of Malaysia provides for a quota system that reserves places in universities and business licences for the indigenous and native bumiputra[54] majority. ...read more.