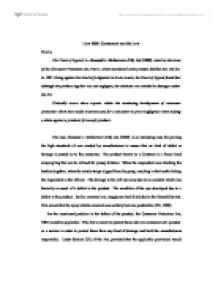 Consumers and the Law

Law 2050: Consumers and the Law Part A The Court of Appeal, in Abouzaid v. Mothercare (UK) Ltd [2000], ruled on the terms of the Consumer Protection Act, Part I, which introduced strict product liability into UK law in 1987. Going against the trend of judgments in lower courts, the Court of Appeal found that although the product supplier was not negligent, the claimant was entitled to damages under the Act. Critically assess those aspects within the continuing development of consumer protection which have made it unnecessary for a consumer to prove negligence when making a claim against a producer for unsafe products. The case Abouzaid v. Mothercare (UK) Ltd [2000] is an interesting case for proving the high standards of care needed by manufacturers to ensure that no kind of defect or damage is passed on to the consumer. The product known as a Cosytoes is a fleece-lined sleeping bag that can be utilised for young children. When the respondent was attaching the buckles together, when the elastic straps slipped from his grasp, resulting in the buckle hitting the respondent in the left eye. ...read more.

The designing of the product itself was very defective as it created a risk for the user and the user did not have any kind of precaution to reposition him in order to change his or her position. The safety of the product was in question as it was far below the standard of what the public was entitled to expect. Here the risk arose in that the design of the product itself was such that there was an element to cause vulnerable damage to the eye resulting in serious consequences. If there was damage instead to the hand it would not have constituted risk of the public. However, this kind of defect was enough for the court to consider negligence on the part of the manufacturer. It was not needed for the court to go further and identify what had actually had to be done by the manufacturer. Besides, it was clear that the company could have done many other things including placing a non-elasticised mean of fastening the seat belts (Pill, 2000). There was a potential defence available to the appellants (Mothercare Co Ltd) ...read more.

Strict liability is a legal doctrine that would hold certain people liable for their actions even though they may not be at fault. usually it would be applicable in case people are engaged in certain high-risk tasks, such as setting up an industry using dangerous chemicals, blasting activities, using wild animals, etc, or any activity that holds the public at risk. Here even if the company performing such activities takes appropriate precaution despite which the accident arose, the company would be held liable. In such a circumstance, negligence cannot be proven; as there are certain standards of care defined which have to be missed by the manufacturer. All that needs to be proven in the case of strict liability is that the product should be defective. Hence, it is a much higher standard than mere negligence, and often manufacturers have to use a number of tests to identify ways and means by which people will use the product and accordingly design the product (Free Advice, 2011). In other cases, the presence of scientific and technical knowledge had the capabilities of throwing greater light on the abilities of the product and the presence of any defect. However, this was not the situation in this case. This was because there was a defect evident even though scientific and technical knowledge was not present. ...read more.